The country is going to the ballot box in 50 states, DC and four territories today, but the outcome of dozens of elections will not be known for days, if not weeks.

In the 2020 presidential election, 42 states and Washington, DC had reported enough results for news organizations to project winners by 3:00am election night.

Election results were delayed in eight states due to counting procedures or where the results were too close to call. Those included Alaska, Arizona, Georgia, Nevada, Michigan, North Carolina, Pennsylvania and Wisconsin -- all of which have competitive Senate, House or gubernatorial elections this year. 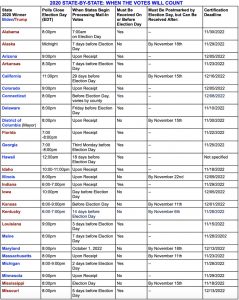 When states begin processing mail-in votes: Upon receiving completed absentee/mail-in ballots, election officials must first process the ballots before they can be counted, which generally entails verifying voter signatures and physically preparing ballots for tabulation. 42 states and DC allow processing to begin before Election Day.

That is different from counting, however, which does not begin until Election Day in 70% of the states.

Ballots must be received on or before Election Day: In 30 states.

Ballots must be postmarked by Election Day, but can be received after: In 20 states and DC. These states may take longer due to extended counting of mail-in ballots.

Certification Deadline: The period after the election when officials canvass or verify that each ballot was correctly counted, and certify the results. This is normally a formality, but in a close contest, we may not know until that date.

Early Bellwethers
There are several key races to watch as early signs of how the night is expected to go for Democrats and Republicans in their quest for control of Congress. 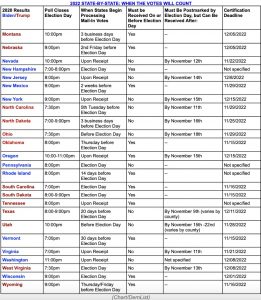 In Virginia, where the polls close at 7:00pm, three races will be among the earliest signs of whether the House is headed for just a red ripple or a red wave.

A win for incumbent Elaine Luria (VA-02), a member of the January 6th Committee whose new district is more GOP-leaning, could mean Democrats have hope of minimizing the average 26-seat-loss traditionally suffered by the party in the White House in off-election years. A sizeable victory for Luria could actually mean hopes of retaining the House.

Congresswomen Abigail Spanberger (VA-07) and Jennifer Wexton (VA-10) are facing tough reelection battles. Both are Democrat-leaning seats and a loss in either foretells serious troubles for Democrats.

In the Senate, the spread of the vote for either party in two Republican-leaning open seats in Ohio and North Carolina, where polls close at 7:30pm ET, will be a key indicator of the mood of the electorate. Similarly, in New Hampshire where incumbent Democrat Maggie Hassan is being challenged by far-right Republican Don Bolduc in an unexpectedly tight contest, results are expected shortly after polls close at 8:00pm.

In the interim, more than 100 legal challenges related to elections have already been filed in 20 states. 75% of those have been filed by Republicans.