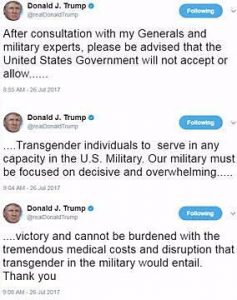 In a less than transparent effort to steer the focus of the headlines away from his Russian investigation woes, President Trump announced today on twitter that the US Government will no longer allow transgender individuals to serve in the military.

The directive reverses yet another of President Obama's landmark human rights policy initiatives - as directed In June of 2016, "Effective immediately, transgender Americans may serve openly.They can no longer be discharged or otherwise separated from the military just for being transgender."

Obama's directive was announced by Ashton Carter who, as then-Secretary of Defense, oversaw the implementation and enforcement of the law.

By contrast, current Defense Secretary James Mattis has been mute on today's announcement, along with all of Trumps "Generals." According to the Chicago Tribune, sources indicate that Mattis and the Pentagon were taken off-guard by the major policy directive.

In response to yet another of the daily, and sometimes shocking, developments coming out of the White House, public and political leaders, including some of the GOP leadership, condemned the action. 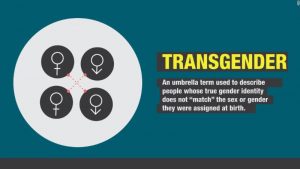 An estimated 4,000 transgender individuals serve alongside the 1,281,900 people in the US armed forces --which includes the Army, Navy, Air Force, Marines and Coast Guard.

Throughout the presidential campaign Trump repeatedly portrayed himself as a fighter for the LGBTQ community, but has instead pro-actively turned back advances made under the Obama administration.

The most powerful statement, however, came from former Chairman of the Joint Chiefs of Staff Mike Mullen, himself a 4-star Navy veteran.