This week's news cycle covered the gamut from failure of the GOP's Healthcare Bill to OJ Simpson's parole, to the resignation of White House Press Secretary Sean Spicer -- but the ever-expanding Trump-Russia collusion investigation still dominated the airwaves and internet with revelations that Donald Trump, Jr. emailed and met with Russian representatives during the presidential campaign.

We will reserve the formal rundown for next week but, for now, will let the comics tell the story.

"Oh cursed irony, the emails giveth the presidency, and the emails shall taketh away." -- Trevor Noah

"Donald Jr. is like the guy at work who opens the obviously fake document and now everyone has a virus on their computer." -- Jimmy Kimmel

"You're being investigated for colluding with Russia. Is this your idea of playing it cool? You're like a bank robber who goes out the next day and buys a Ferrari with a bank robber vanity plate." -- Seth Meyers

"I'm not even waiting for Curb Your Enthusiasm to come back now,  this is the best comedy show ever." -- Trevor Noah

The Late Show's Stephen Colbert took it to a new level by broadcasting from the Kremlin for "Russia Week."

On revelations that Donald Trump Jr met with Russian lobbyist Rinat Akhmetshin  who "is reportedly a former Soviet Counterintelligence Officer. Of course, when it comes to Don Jr. there's not much intelligence to counter." 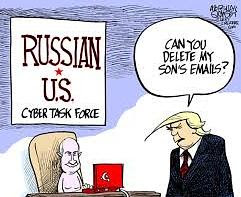 "Here's the deal, Akhmetshin denies any current ties to Russian spy agencies, so you know it must be true. Remember the first rule of spy club: tell everyone you're in spy club."

On Trump Jr's changing story about the nature and size of the meetings
"So, there was a 5th person we didn't know about, then we found out there was a 6th! That's more people than are working at Trump's EPA. Who was the 6th person? I don't know, probably the person bringing chairs into the conference room."

"This is the first time that a Trump has lied about having a smaller crowd size."

"Keep in mind Don Jr.'s defense this entire time is that he wanted to collude with Russia and got nothing, therefore, innocent?"

"All I said in that little clip there was that I was considering a run. If I decide to run, obviously, I'm not gonna ask the Russians to help my campaign. OK? I'd have my son-in-law ask them." 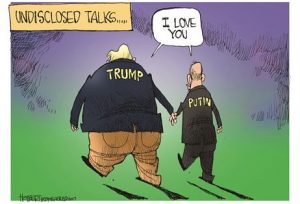 Have a good Weekend!