President Trump's fight to "repeal and replace" the Affordable Care Act all but died yesterday, as Republican leaders acknowledged they do not have the votes to pass the proposed replacement plan in the Senate. 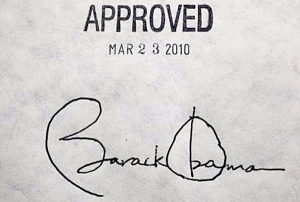 Although the US House of Representatives, which is controlled by a 240-194 Republican majority, passed it's own repeal and replace plan, the American Health Care Act of 2017 (H.R.1628), May 4th, the Senate version of the bill has met with unmovable opposition from key Republican Senators.

During the election, candidate Trump vowed to rollback President Barack Obama's signature 2010 healthcare legislation "from day one" but, as with many of his campaign promises, delivering on it is another reality.

The ACA, also known as "Obamacare," has provided 20 million people with health insurance and has a 46% (RCP average, 7/18/17) approval rating among Americans, who have no desire to play politics with their health coverage. 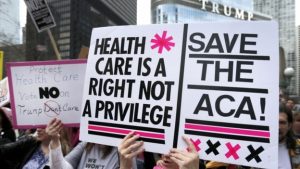 The GOP Senate plan for replacing Obamacare, titled The Better Care Reconciliation Act, has been met with vehement opposition from the public and lawmakers on both sides of the aisle, and attempts to bring the original June 22nd Senate version to the floor for debate have failed.

Although Majority Leader Mitch McConnell announced a retreat from the full battle, and in a shift of strategy, he stated that the Senate will instead vote next week on repeal-only --which means they will be voting on a motion to proceed with debate on just the "repeal" component of the bill without the controversial "replace" part of the plan.

In doing so, McConnell hopes to persuade enough of the Republican defectors to switch their "No" votes to reach the necessary 50 votes needed to pass the procedural vote, which would at least get the bill to the Senate floor for debate. 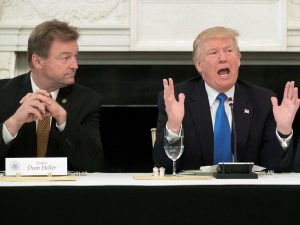 In response to the announcement of a potential vote on repeal only, the non-partisan Congressional Budget Office's updated it's "score" or analysis of the GOP "repeal only" plan today -- stating it would leave an additional 32 million Americans uninsured by 2026 (as opposed to the June 26th figures of 22 million).

In a White House meeting with GOP Senators today, Trump made it clear that any Republican that voted against the "repeal" plan would pay a price - including, possibly, their Senate seat.