Just before 2:00am this morning, the "Skinny Repeal" to roll back the Affordable Care Act or "Obamacare" failed. Again.

Republican Senators Murkowski (AK), McCain (AZ) and Collins (ME) voted no on the Skinny Repeal

The effort was the latest in a string of GOP's legislative proposals that started with a full scale "repeal and replace" plan, but dwindled to a procedural vote and debate on the most basic "skinny" components of repeal only. The defeat was a historic blow to Trump, who has touted replacing President Barack Obama's signature 2010 healthcare legislation as one of his top campaign promises.

In May the Republican-controlled US House passed it's version of the American Health Care Act (HR 1628), with the knowledge that the controversial plan would never pass the more responsible upper chamber. With just a slim 52-48 majority in the Senate, Republicans would have had to secure the vote of almost every GOP member for passage of what was already considered one of the least popular pieces of legislation to come before for the US Senate - and their constituents. 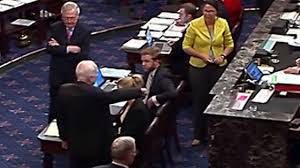 The "no votes" of Republican Senators Susan Collins (ME) and Lisa Murkowski (AK) were anticipated, but it was "thumbs down" from Senator John McCain (R-AZ), the GOP's 2008 presidential nominee, that determined the final outcome.

Ironically, all took place during Trump's newly-declared  "American Heroes Week" which has fallen flat coming from the White House in the current environment.

Regardless of partisan preferences, no one can deny McCain, a decorated Vietnam war veteran who was held captive and tortured for more than 5 years, already qualifies in the hero category.

But McCain's vote, and the message behind it, carried even more weight following his return from surgery last week for removal of an aggressive brain cancer.

Senate Majority Leader Mitch McConnell (R-KY), who has been at the forefront of the GOP's larger seven-year quest to overturn ACA, called the vote a "disappointing moment."

Echoing McCain's call for bi-partisan cooperation, Senate Democratic Leader Chuck Schumer (D-NY), "We are not celebrating, we are relieved." "Let's trust each other... Let's return to regular order."

While the GOP's healthcare repeal efforts appear to have been dismantled, for now, lawmakers will have time to recoup during summer recess.  House members head to their Congressional Districts today and Senate recesses from August 11th to September 5th -- when both houses of Congress return.

In the interim, President Obama's Affordable Care Act remains the law of the land!

Have a good weekend.