In an unprecedented counter to historical headwinds against the party in the White House in midterm elections, Democrats defied the odds, beating back what should have been a Republican red wave.

The GOP had all the tools at hand needed to take back both the Senate and House -- a president with low approval ratings, high inflation and gas prices, and three-fourths of an electorate under a cloud of economic discontent.

But the party's extremism under the thumb of a disgraced former President lost out to voters' distaste for division and concerns for the direction of the country threatened by attacks on democracy and political violence -- as underscored by the January 6th attack on the Capitol and, most recently, the physical assault on Speaker Nancy Pelosi's husband Paul.

According to exit polls, 2 in 3 voters believe that democracy is under threat in the United States.

Voters also rebelled against threats to their personal freedoms in the wake of the US Supreme Court's June decision overturning the federally protected right to an abortion. 27% of voters ranked abortion as the most important issue in deciding their vote, just points behind the 31% who ranked inflation as their top issue.

In California, Michigan and Vermont voters passed ballot measures enshrining the "right to reproductive freedom" in their state constitutions, and in the Republican states of Kentucky and Montana, voters rejected anti-abortion referendums.

In Pennsylvania, where Democrats flipped a Republican Senate seat with the victory of John Fetterman, abortion was cited as the key issue driving voters to the polls.

While the race gave Democrats a valuable win in their fight to retain control of the US Senate, the ultimate balance of power, now tied at 48-48, rests on four undecided contests.

One of those, Alaska, is a predetermined GOP seat, with incumbent GOP Senator Lisa Murkowski and Republican challenger Kelly Tshibaka awaiting the final results of the ranked-choice voting tabulations on November 23rd. 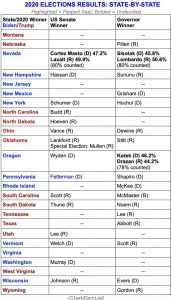 In Arizona, incumbent Democratic Senator Mark Kelly leads Republican challenger Blake Masters by 4.6%, with 73% of the vote counted. In addition to the ongoing counting of mail-in ballots, a printing malfunction across polling places in Maricopa, Arizona's most populous county, is delaying results.

In Nevada, incumbent Democrat Catherine Cortez Masto trails GOP challenger Adam Laxalt by 2.7%, with 80% reporting. Elections officials expect to have the final tally of tens of thousands of uncounted mail-in ballots no later than November 17.

The Georgia Senate race between incumbent Democrat Raphael Warnock (49.2%) and GOP challenger Herschel Walker (48.7%) is going to a December 6th runoff as no candidate achieved 50% of the vote.

In the US House, the count stands at 207 Republicans to 183 Democrats, with 45 races still undecided. Democrats are projected to ultimately win 213 seats to Republicans' 222.

Tomorrow: Rundown on the House!

March 15, 2019 By demand! Every few months we like to do a humor roundup, as a reminder that there are still reasons to laugh. We are overdue. Seth Meyers “Paul Manafort was sentenced to an...