This morning Ukrainian President Volodymyr Zelensky addressed the United States Congress and the American people in an open appeal for more assistance in Russia's war against his country, now in its 21st day.

The historic speech, delivered live from Kyiv, was an emotional and impassioned plea from the now world-renowned leader who has come to symbolize democracy itself. 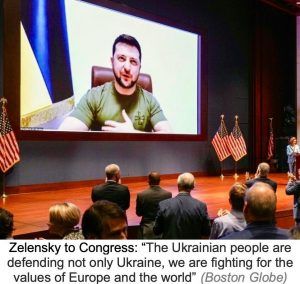 In the powerful and compelling speech, Zelensky asked Congress to help determine "the destiny" of the Ukrainian people, eloquently evoking "pages" of American history "that would allow you to understand Ukrainians."

"Remember Pearl Harbor, terrible morning of December 7, 1941, when your sky was black from the planes attacking you. Just remember it. Remember September the 11th, a terrible day in 2001, when evil tried to turn your cities, independent territories in battlefields, when innocent people were attacked, attacked from air. Yes, just like nobody else expected it. You could not stop it. Our country experienced the same every day, right now, at this moment."

Saying "Russia has turned the Ukrainian sky into a source of death for thousands of people," Velensky pleaded "for an answer to this terror from the whole world," calling for a humanitarian no-fly zone, followed by an appeal for specific aide, including additional sanctions, defense systems, weapons and airpower. 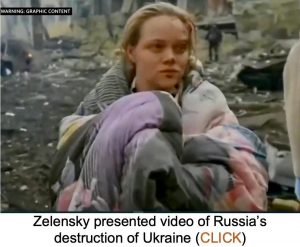 He pleaded, “'I have a dream.' These words are known to each of you today. I can say, 'I have a need: I need to protect our sky.' I need your decision, your help, which means exactly the same, the same you feel when you hear the words I have a dream.'"

Zelensky thanked President Joe Biden for his leadership and "for everything that US government and your people have done for us, for weapons and ammunition, for training, for finances, for leadership in the free world, which helps us to pressure the aggressor economically. However, he summarized, "now it is true in the darkest time for our country, for the whole Europe, I call on you to do more." 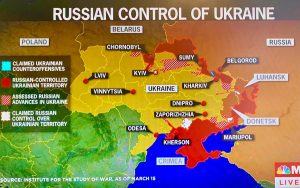 While Zelensky was speaking to Congress, Putin was delivering an angry televised address that threatened a new crackdown on his own people.

“The Russian people will always be able to distinguish true patriots from scum and traitors and simply spit them out like a fly that accidentally flew into their mouths,” said Putin. “I am convinced that such a natural and necessary self-purification of society will only strengthen our country, our solidarity, cohesion and readiness to respond to any challenges.”

Putin's comments, which also included condemnation of the West's "goal" of destroying Russia, came as official attempts to negotiate an end to the war were taking place between Russian and Ukrainian representatives.

In an afternoon press conference at the White House today, President Biden spoke of the "crippling sanctions" the US and allies are imposing on Russia while reiterating their continued commitment to stand with Ukraine. 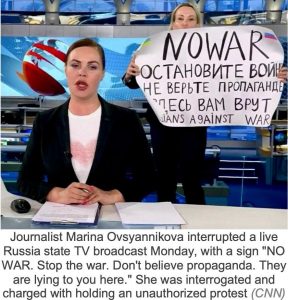 Biden, who for the first time called Putin a war criminal, also spoke directly to his public, saying, "Now, I want to be honest with you. This could be a long and difficult battle. But the American people will be steadfast in our support to the people of Ukraine in the face of Putin's immoral, unethical attacks on civilian populations. We are united in our abhorrence of Putin's depraved onslaught and we'll continue to have their backs as they fight for freedom, their democracy, their very survival."