The Democratic National Committee (DNC) is holding its Summer meeting this week, its bi-annual gathering to address party business, reports, resolutions and strategy going into the final stretch of the 2022 midterm elections.

The meeting, a four-day political passion fest of Democratic leadership, committee members, speakers and supporters from across the country, kicked off yesterday at the Gaylord National Convention Center in National Harbor, Maryland.

For those uninitiated in the ways of the Party, we are providing a primer! 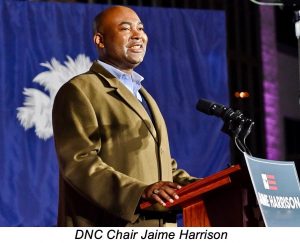 Leadership
The DNC is led by a team of national officers who are elected by members of the DNC every four years. Internally, the DNC's agenda, rules and operations are governed by a series of committees including the Rules and ByLaws, Budget & Finance, Credentials, Resolutions and Platform Committees.

DNC Members
There are close to 450 DNC members who are elected or appointed as delegates to a four-year term from five categories. Some are elected on the ballot as part of the state's Democratic primary, while in other states the members are elected by the State Democratic Committee or the State Convention. Membership is equally divided between men and women. They include:

* State-Elected (200 members). Based on population, a minimum of two from each state, the District of Columbia, the territories and Democrats Abroad. State processes vary, but most are elected by the state's Democratic Committee, at the State Party Convention or Democratic Primary.
*  State Chairs and Vice-Chairs
*  Current and former Democratic Presidents, Vice Presidents
*  Official Party Committee Representatives from affiliated Party Committees that provide resources and focus on electing and reelecting lawmakers at specific levels of office.

At-Large Members: Approximately 75 individual members who represent different constituencies and are leaders "at-large" who are nominated by the DNC Chair and approved by a vote of DNC members. 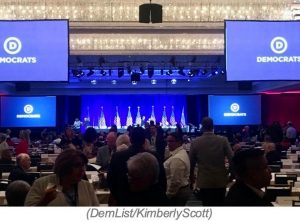 DNC Caucuses: The DNC has two types of caucuses: Regional and Constituency

DNC Councils: Created to represent certain communities that do not meet the requirements for Constituency Caucuses and/or are organized around an issue or cause. Membership on DNC Councils includes both DNC members and non-DNC members. 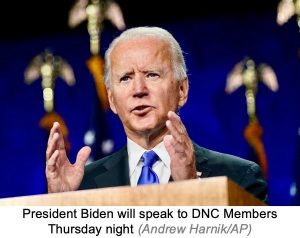 DNC Meeting Schedule
Press & Guests: The caucus and council meetings and Saturday's general session will be open to the press and the public.
Watch The Meeting: President Biden's address Thursday evening and the DNC General Session on Saturday, including remarks by Vice President Kamala Harris, will be live-streamed on the DNC's YouTube Channel.

SignUp for the Daily column on policy, politics and the players.