The Democratic National Committee meets in San Francisco, California this Thursday through Saturday for its Summer Meeting to discuss organization and strategy leading up to the 2020 presidential -- only 439 days away! 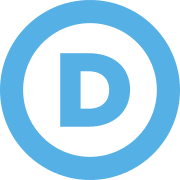 DemList will keep you posted on developments from the Golden Gate City, but for those uninitiated to the ways of the Party, we start with A Primer!

The DNC is responsible for establishing and promoting the Democratic party principles, and coordinating strategy and activity to support the election of Democratic candidates at the local, state, and national levels. 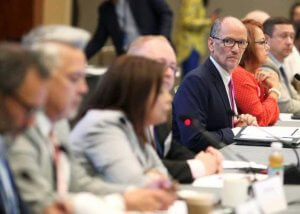 Leadership
The DNC is led by a team of national officers who are elected by members of the DNC every four years.

Internally the DNC's agenda, rules and operations are governed by a series of Committees including the Rules and By-Laws, Budget & Finance, Credentials, Resolutions and Platform Committees.

DNC Members
There are 447 DNC Members who are elected or appointed as delegates to a four-year term from five categories. Some are elected on the ballot as part of the state's Democratic primary, and in other states the members are elected by the State Democratic Committee or the State Convention. Membership is equally divided between men and women.

*  State-Elected (200 members). Based on population, a minimum of two from each State, the District of Columbia, the Territories and Democrats Abroad.
State processes vary, but most are elected by the state's Democratic Committee, at the State Party Convention or Democratic Primary.

The DNC will meet August 22-24 in San Francisco 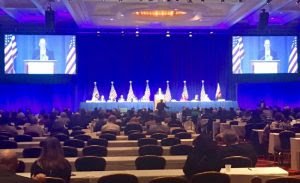 What Goes on at The Meeting
Over the course of three days, DNC members will participate in caucus, council, and committee meetings, as well as training sessions.

The caucus meetings and Saturday's general session will be open to the press and the public.

The DNC has two types of Caucuses: Regional, which represent the Eastern, Mid-Western, Southern and Western US, and Constituency, which include Asian American and Pacific Islander, Black, Hispanic, LGBT, Native American and Women. Regional Caucuses elect officers and four representatives to serve on the DNC Executive Committee. 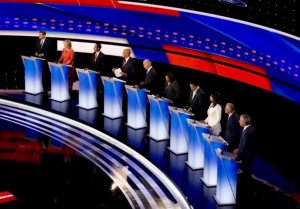 On Friday, in a "Meet the Candidates" session, 13 of the 2020 Democratic Presidential contenders will make their pitch to DNC members.

Under the new rules adopted at the 2018 Summer Meeting, DNC members are convention delegates, but do not have a vote on the first ballot in the Democratic presidential nominating process. However, if the nomination fight goes to a second ballot, then they may cast a potentially decisive vote at that time.

Although the scenario, known as a "brokered convention," has not happened since the advent of the modern nomination system in 1972, many feel, with 25 candidates currently in the race, it may come down to an historical battle between two.

DNC Members will also receive a briefing on next year's Democratic Convention, scheduled for July 13th-16th in Milwaukee, Wisconsin, from veteran politico and Convention CEO Joe Solmonese and his team.

On the issues, there are several resolutions regarding a proposed Climate Change Debate. Although CNN and MSNBC are hosting two presidential forums on the topic in September, party activists have been calling for a head-to-head, DNC-sponsored debate among the Democratic candidates.

DemList, reporting in from the DNC meeting, will keep you informed.

DemList is a daily political column and resource dedicated to educating, informing and connecting the Democratic family. SignUp today.
Forward and Follow on Facebook, Twitter and LinkedIn

January 18, 2022 With now more than two-thirds of state redistricting maps approved, the political landscape of the 2022 elections is finally coming into focus, with the final battles likely to be...