The impeachment trial of President Donald J. Trump began yesterday, beginning with the debate over the organizing resolution that determines the rules of the trial. 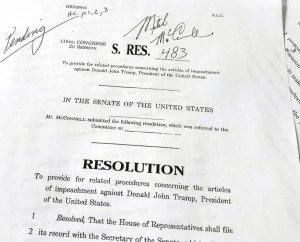 The initially proposed rules for the trial, released Monday night by Senate Majority Leader Mitch McConnell (R-KY), would have limited opening arguments to 24 hours for each side, over a two-day schedule. The timeframe would have forced key Democratic testimony past midnight -- when most Americans would not be watching.

After an uproar from the Democrats, and negative feedback from some of his own GOP Senators, however, McConnell added a handwritten amendment to add a third day for opening arguments.

He also reversed course on barring all evidence gathered by the House impeachment investigation from being entered into the Senate record. It will now be admitted automatically, rather than subject to vote.

But the perceived compromise was far from the Democrats' idea of a fair trial, as reflected in forceful opening statements by McConnell and Schumer.

The proceedings quickly turned to the hands of the House Managers, led by House Intelligence Chair Adam Schiff (D), and the President's attorneys, led by Pat Cipollone and Jay Sekulow. Each side was given an hour of statements for each individual amendment. 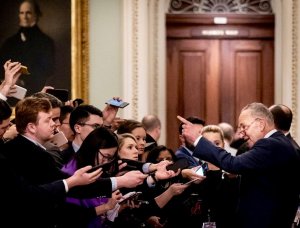 House Managers presented a case for each of Schumer's amendments, reviewing in detail related evidence against Trump in the process. They frequently used video'd witness testimony from the House hearings that serve as the foundation of the impeachment articles.

After the close of passionate arguments by both Managers and Trump's legal team on each amendment, McConnell methodically and successfully moved to table, or set aside, each one. In almost every case his motion was approved by a 53 to 47 vote along party lines.

Republican Senator Susan Collins (ME) broke with Republicans on Schumer's tenth amendment to allow each side 24 hours to respond to the trial motions, which failed.

There had been some expectation that some of the other 4-5 moderate Republicans facing reelection in swing states might vote with the Democrats on some of the amendments, but all fell in line under GOP leadership. 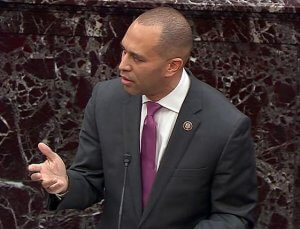 At approximately 9:20pm ET McConnell proposed that any remaining Democratic amendments be "stacked," or grouped for quick subsequent votes, without interim testimony or presentation of evidence. Schumer immediately rejected the motion.

Next Up
The trial continues today, Wednesday, January 22nd at 1:00pm ET.

February 14, 2021 At 3:49pm yesterday, the United States Senate, by a vote of 57 to 43, acquitted Donald J. Trump on the Article of Impeachment on Incitement of Insurrection. Seven Republicans...