Yesterday 59 female Members of Congress called on the House Oversight Committee to investigate sexual misconduct charges against President Trump, and today brings to a close one of the most controversial special elections in history, with an accused child molester in the lead. 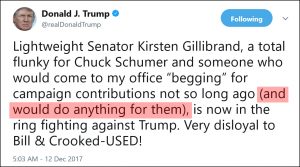 Yet, in the midst of the public outcry over revelations of sexual harrassment by high profile entertainment, corporate and elected leaders, and a renewed effort to hold Trump accountable for similar past allegations, the President of the United States chose to attack a sitting female US Senator with a sexist inference.

As with dozens of past tweets, Trump seemed to have deliberately inserted himself further into the controversy at hand, while simultaneously incriminating himself with his comments.

In an early morning tweet, Trump called Senator Kirsten Gillibrand (NY) a "lightweight" and "flunky" for Senate Democratic leader Chuck Schumer, claiming she had previously begged him for contributions and "would do anything" for the campaign funds. 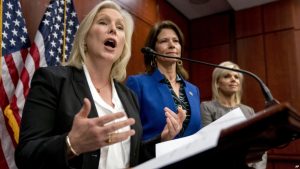 Gillibrand: "You cannot silence me or the millions of women" who are speaking out

The sexual implication and written assault on Gillibrand, who is a potential Presidential contender and who has been among the chorus of voices calling for Trump's resignation and/or an investigation, brought immediate condemnation by the media and other lawmakers.

"Only if your mind is in the gutter would you read it that way."  -- WH Press Secretary Sarah Huckabee Sanders on accusations the President's tweet was a "sexual smear" 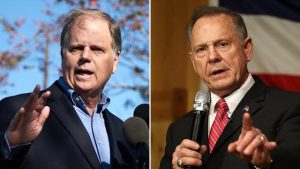 In the interim, all eyes are on the outcome of tonight's Alabama Special Election to replace the seat held by now-Attorney General Jeff Sessions.  The election, and the allegations against frontrunner and former Alabama Supreme Court justice Roy Moore, has been the focus of national attention and the movement to rid Congress of sexual predators.
The outcome of tonight's election may be a win for Democrats, regardless of the outcome.

If Roy Moore wins, he becomes the face of Republicans in Congress and, if Republican Majority Leader Mitch McConnell keeps his promise, one that will be facing an immediate ethics investigation by the  US Senate.

If Doug Jones wins, Democrats will be one step closer to a Senate majority, having picked up a seat in a solidly red state that will have appeared to rebuke Moore and Trump - who won the state by 63% in 2016 - at the ballot box.

The end result will likely be determined by the women of Alabama, or the women in Congress, or both.

June 29, 2020 This morning the Supreme Court of the United States (SCOTUS) announced its decision in June Medical Services LLC v. Russo, blocking a controversial Louisiana abortion law that would...

August 25, 2022 Now less than three months from the November elections, an NBC poll shows that Americans are shifting their focus, identifying “threats to democracy” as the number one...