Now just one week out from the November 8, 2022 midterm elections, the battleground state of Wisconsin is at the center of the fight for control of the US Senate. 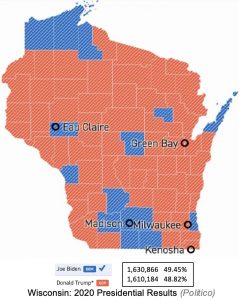 Purple State Politics
In the critical Midwest swing state, the two most recent presidential elections were decided by less than one percentage point. In 2016, Donald Trump carried Wisconsin with 47.2% of the vote to Hillary Clinton's 46.5%.

The political divide is reflected in the split control of party power in the state. While the Democratic Party controls the offices of Governor, Secretary of State, Treasurer and Attorney General, the Republican Party holds a majority in the State Senate and House.

The Wisconsin legislature is considered the most gerrymandered in the country. Although Democrats swept all five statewide races and won 53% of votes cast for the State Assembly in 2018, they retained just 36% of seats in the chamber.

The 2020 redistricting process did little to alter the landscape. Wisconsin's new congressional map, approved by the state Supreme Court after a legal showdown between Evers and the GOP state legislature, carves the state into six Republican-leaning seats and two Democratic strongholds. Republicans currently hold five seats to Democrats' three.

Wisconsin is also one of six states with one Democratic and one Republican US Senator. The Badger State's junior Senator is Democrat Tammy Baldwin, who was elected in 2016 with 51.4%, succeeding retiring Democratic Senator Herb Kohl. 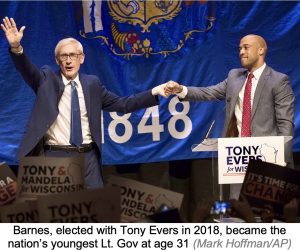 A staunch Trump ally, Johnson was active in efforts to overturn the 2020 presidential election results, including an attempt to arrange for pro-Trump electors to illegally cast Wisconsin's electoral votes for the defeated president on January 6, 2021.

He subsequently pushed conspiracy theories about the US Capitol attack, at one point blaming Nancy Pelosi, and voted to declare Trump's second impeachment trial unconstitutional.

Barnes, who announced his challenge to Johnson in July 2021, all but cleared the Democratic field of seven candidates by the August 9, 2022 primary, securing 77.5% of the vote.

Wisconsin has been viewed as Democrat's best chance to flip an incumbent, but Barnes' 7-point post-primary polling lead has dissolved. An October 14-22, 2022 Data For Progress poll of likely voters showed Johnson leading Barnes 51% to 46% (MOE: ± 3.0%). 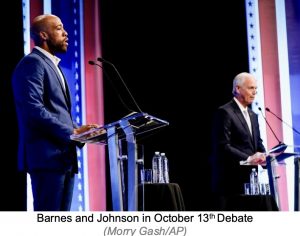 GOTV: 50,000 new voters have registered in the state since August 1, making it the highest number of registered voters ever for a midterm election. While Wisconsin does not register voters by party, as of October, 65,000 more voters lived in counties that voted for Tony Evers (D) than Scott Walker (R) in the 2018 gubernatorial election.

Where to Vote in Wisconsin!

DemDaily: The Status of Social Security