Tuesday's State Supreme Court election in Wisconsin delivered a significant win for Democrats in a state where they have been under seige in the courts and in the legislature for the last decade.

The results also reflect the same increased Democratic voter trends we have seen in the last year's congressional special elections, further shoring up the case for a blue wave in the mid-term elections.

Trouble for the GOP
Win or lose, in the other pre-midterm elections, Democratic candidates have consistently outperformed Hillary Clinton's 2016 numbers -- on the average 12% better than the partisan lean (what would be the expected vote based on history).  Dallet won 55.7% to 44.3% victory in a state where Trump beat Clinton, 47.9% to 46.9%. 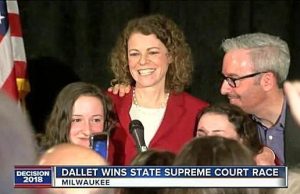 Republicans hold five of Wisconsin's congressional seats to the Democrats' three. All eight incumbent Members of Congress are running and, at this point, likely to hold onto their districts.

Tuesday's voter turnout of 22.2% - more than double the usual turnout for a spring election - is good news for the Badger State's US Senator, Tammy Baldwin, who is up for re-election in November and is favored to win.

Enemy of the People
The numbers, however, spell trouble for Republican Governor Scott Walker, whose defeat in November will be the cause-celeb for labor and progressives.

The two-term Governor, and one-time presidential candidate, who has been accused of being in the "back pocket" of the right-wing Koch brothers, has become a national figure in more ways than one.

Walker survived a 2012 recall election after a high-profile fight with the state's public workers over collective bargaining rights, and has passed precedent-setting, conservative laws regarding education, abortion, healthcare, voter identification, redistricting and anti-labor "right-to-work" that have been challenged in the courts. In most cases, Walker has won.

Winning the Bench
Conservatives have had a lock on the Wisconsin Supreme Court for over 20 years. Dallet's election to the ten-year term reduces the current 5-2 conservative majority on the court. 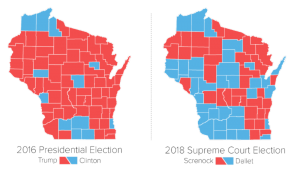 But Rebecca Dallet's election to the state's highest appellate court has an impact far beyond the boundaries of Wisconsin and electoral politics.

In an era where we are increasingly dependent on the courts to preserve our constitutional rights, these elections are critical.

Judgeships on state supreme courts are appointed or re-appointed by a Governor (with collegial body consent), selected through a merit process, elected by the legislature or elected in partisan or non-partisan elections, but it varies for each state.

Thirty-two states will hold state supreme court elections in 2018 for a total of 74 of the 344 seats up for election.

Know when they are in your state (click), and Go Vote.

DemDaily: It is all in the Language!

It is no secret that the way candidates speak influences voters’ perceptions of them and their personal character, beliefs and capability for the office- and there are no shortage of...