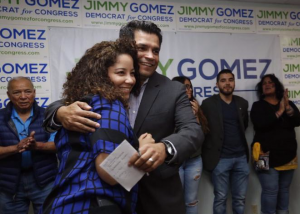 Democrats now have a plus one in the special election column!

Gomez, 42, beat fellow Democrat and former Los Angeles City Planning Commissioner Robert Lee Ahn 60.1% to 30.9%. Gomez and Ahn were the top vote-getters in the April 4th jungle primary, where all candidates, regardless of party affiliation, compete for the top two slots to advance to the general election.

The predominantly Democratic, Los Angeles-based seat has been held since 1992 by Becerra, who was tapped by Governor Jerry Brown in January to replace now-Senator Kamala Harris as the state's attorney general. 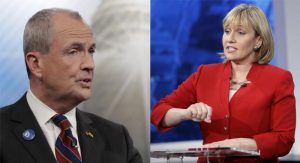 Murphy, a former Ambassador to Germany and Goldman Sachs executive, beat a field of five candidates with 48.3% and Guadagno overcame four opponents to win with 46.8%.

A May Quinnipiac poll showed Murphy leading Guadagno 50%-25% in a general election match-up, with 21% undecided -- setting the stage for Dems to re-take the seat held by Christie, dubbed "America's most unpopular Governor."

Next Up!
The next election on the books is Virginia's gubernatorial primary next Tuesday, June 13th, where Lieutenant Governor Ralph Northam and former Congressman Tom Perriello are in a neck-and-neck race for the Democratic nomination.

The winner will likely face former Republican National Committee Chairman and 2014 US Senate nominee Ed Gillespie in November to replace incumbent Terry McAuliffe, who is term-limited. A May 9-14 Washington Post-Schar poll shows both Dems leading Gillespie by double-digits in the general.

Of the 38 gubernatorial seats that are up in the 2018 election cycle, New Jersey and Virginia are the only two up in 2017.

In the Georgia special, now the most expensive Congressional race in history, Democrat John Ossoff holds a razor-then lead over Republican Karen Handel 49.1% to 47.6% (WSB-TV/Landmark, May 30-31).