DemDaily: Who is Ketanji Brown Jackson?

DemDaily: Who is Ketanji Brown Jackson?

If confirmed, Jackson will replace Justice Stephen Breyer, 83, who announced his plans to retire last month after nearly three decades on the High Court.

The Nominee
Judge Ketanji Brown Jackson currently sits on the US Court of Appeals for the District of Columbia, the country's second most powerful federal court, which is often referred to as a stepping stone to the Supreme Court. 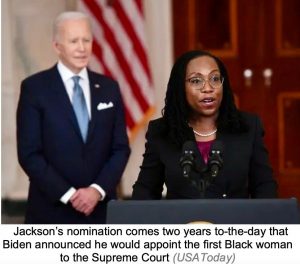 The breadth and depth of her legal credentials exceed most Supreme Court nominees. She has served as a federal appellate judge, a federal district court judge, a member of the US Sentencing Commission, an attorney in private practice, and as a federal public defender.

She has also been confirmed by the US Senate three times with bipartisan support.

Background
Jackson grew up in Miami, Florida, and is the daughter of Johnny Brown, chief attorney for the Miami-Dade County School Board, and Ellery, principal of the New World School of Arts.

She worked in private practice in 1998 for the DC law firm of Miller Cassidy Larroca & Lewin before clerking for Justice Stephen Breyer during the Supreme Court’s 1999-2000 term. 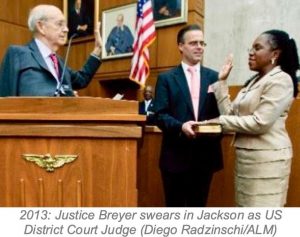 From 2000 to 2003, Jackson worked in private practice specializing in white-collar criminal defense and the negotiated settlement of mass tort claims.

In February 2010, having been nominated by President Barack Obama, Jackson was confirmed by unanimous consent as Vice Chair of the US Sentencing Commission.

Three years later, Obama nominated her to serve on the US District Court for the District of Columbia and the Senate confirmed her by voice vote in March 2013.

In June 2021, President Biden nominated Jackson to the US Court of Appeals for the DC Circuit. In a 53-44 vote, she was confirmed by all 50 Democrats and three Republican Senators -- Susan Collins (ME), Lindsey Graham (SC) and Lisa Murkowski (AK).

Jackson is a member of the Judicial Conference Committee on Defender Services as well as Harvard University's Board of Overseers and the Council of the American Law Institute. She also serves on the board of Georgetown Day School and the US Supreme Court Fellows Commission.

At the age of 51, she will be one of the youngest justices – second only to Justice Amy Coney Barrett, who just turned 50th this month.

Jackson has been married since 1996 to fellow Harvard graduate and cancer surgeon Patrick Jackson. They have two daughters, Talia (21) and Leila (17). Patrick's twin brother is the brother-in-law of Janna Ryan, wife of former Speaker of the House Paul Ryan.

Key Opinions
While Jackson's June, 2021 Senate confirmation hearings for the US Court of Appeals for the District of Columbia provided a preliminary dress rehearsal for the confirmation process, GOP Senators will now take a much deeper dive into her most notable legal decisions.

Trump & The Insurrection
In September 2021 Jackson served on a three-judge US Court of Appeals panel that ordered the disclosure of Trump White House documents sought by the January 6 Committee. That decision was affirmed this month by the Supreme Court.

As a US District Court Judge Jackson ruled, in 2019, that Trump White House Counsel Don McGahn must comply with the House’s subpoena seeking his testimony over Trump’s efforts to obstruct the Russia investigation. 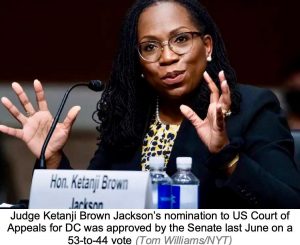 Labor: On February 1, 2022, in one of her first rulings as a federal appeals judge, Jackson struck down a Trump-era policy that had limited the collective bargaining power of federal unions.

In April 2018, as a US District Judge, Jackson ruled against the Trump administration in a lawsuit brought by federal employee unions challenging three of the president’s executive orders on the collective bargaining rights of federal workers.

Women's Health Services: In two 2018 cases challenging the Department of Health and Human Services' decision to terminate grants for teen pregnancy prevention programs two years early, Jackson ruled that the decisions, executed without any explanation, were arbitrary and capricious.

The Disabled: In 2015's Pierce v. District of Columbia, Jackson ruled that the DC Department of Corrections violated the rights of a deaf inmate under the Americans with Disabilities Act because jail officials failed to assess the inmate's special needs.

Environment: In 2018, Jackson ruled in favor of the US territory of Guam in its claim for financial relief from the US Navy for pollution caused by a landfill it had created on the island to dispose of munitions and chemicals.

Immigration: In 2019, Jackson issued a preliminary injunction in Make the Road New York v. McAleenan which blocked a US Department of Homeland Security rule that would have expanded fast-tracked deportations without immigration court hearings for undocumented immigrants.

Conspiracies: In 2017, Jackson sentenced Pizzagate conspiracy theorist Edgar Maddison Welch to four years in prison for firing an assault rifle in DC restaurant. Welch claimed the restaurant was a front for a child sex abuse ring run by top Democrats, including Hillary Clinton. 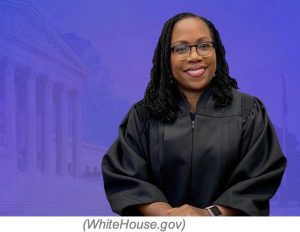 Sentencing/Crime: While serving on the US Sentencing Commission, Jackson was involved in an Obama-era push to make sentencing guidelines for judges less draconian, which included the "drugs minus two" amendment, that implemented a two offense-level reduction for drug crimes.

Guantanamo: While Jackson's unique history as a public defender is a considerable asset, it also opens her up to broader scrutiny on high-profile criminal cases. One of her early cases, in 2005, was defending Guantánamo Bay detainee Khi Ali Gul who was accused of being an intelligence chief during the Taliban regime and being involved in the planning of a rocket attack on a US base.

Next Steps
The confirmation process, which is being shepherded by former Democratic Alabama Senator Doug Jones, begins immediately with individual meetings with US Senators from both sides of the aisle.

In advance of hearings before the Senate Judiciary Committee, committee staff will begin pouring over her case records, publications, public statements and rulings. The first hearing date has yet to be set, but Senate Majority Leader Chuck Schumer (D-NY) is hoping for a timeline similar to the confirmation of Justice Amy Coney Barrett - who was confirmed in less than five weeks in the fall of 2020.

Once Jackson's nomination is voted on and reported out by the Judiciary Committee, she needs just 51 votes to be confirmed by the full Senate.

February 3, 2021 Amid the dozens of executive orders issued by President Biden to reverse the ills of the Trump administration, is the January 20th order “Ensuring a Lawful and Accurate...