With just 36 days until the election, Americans are facing yet another threat under the Trump administration -- one that will have consequences for decades.

On Saturday, Donald Trump announced his nomination of Amy Coney Barrett, a federal appellate judge and Notre Dame law professor, who, if confirmed, would cement the conservative wing of the US Supreme Court.

"His judicial philosophy is mine, too. A judge must apply the law as written."

Barrett spent two years as a judicial law clerk from 1997 to 1998, first for Judge Laurence Silberman of the U.S. Court of Appeals for the D.C. Circuit, then for Justice Antonin Scalia of the U.S. Supreme Court from 1998 to 1999.

Barrett was reportedly a favorite of Scalia's, and has followed in his footsteps as a "textualist" judge -- someone who interprets the law based on its plain meaning at the time in which it was written. 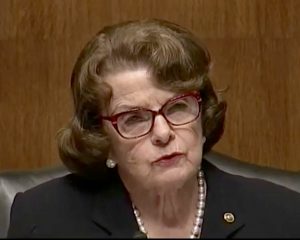 Feinstein: "Dogma lives loudly within you."

From 1999 to 2002, she practiced law at Miller, Cassidy, Larroca & Lewin in Washington, D.C., which merged into Baker Botts, where she worked with Republicans, providing research and briefing assistance, on Bush v. Gore.

In May of 2017, President Donald Trump nominated Barrett to the Seventh Circuit Court of Appeals, which covers Indiana, Illinois and Wisconsin.

During her September confirmation hearings, Senator Dianne Feinstein's (D-CA) questioning of Barrett about "the issue of faith versus fulfilling the responsibility as a judge today," was assailed by conservatives as anti-religion bias. 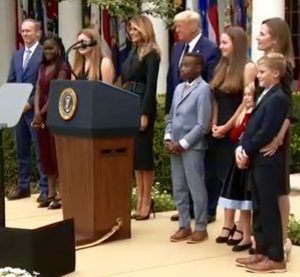 While her devotion to Catholicism has made her a darling of the religious right, Barrett's connection to a self-described ecumenical "covenant" called the People of Praise, which suggests that men are the "heads" of their community, was not questioned.

Her membership in the group, which also believes that relations should only happen between heterosexual married couples, is expected to be a point of contention during the upcoming hearings.

Before and while serving on the federal bench, Barrett served as a professor of law at Notre Dame Law School, where she taught civil procedure, constitutional law and statutory interpretation.

At the age of 48, she will be the youngest justice on the Supreme Court, and will also be the first mother of school-aged children to serve on its bench.

Barrett has been married since 1999 to fellow Notre Dame Law School graduate Jesse Barrett, who worked as an Assistant U.S. Attorney for the Northern District of Indiana for 13 years, before becoming a partner at SouthBank Legal in South Bend, Indiana. They have seven children, two of whom were adopted from Haiti, one in 2005 and one after the 2010 Haiti earthquake. 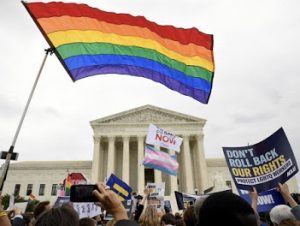 Barrett: "marriage and family (are) founded on the indissoluble commitment of a man and a woman."

* Barrett was critical of John Roberts's majority opinion in National Federation of Independent Businesses v. Sebelius, upholding the constitutionality of Obamacare's individual mandate. Barrett said, "Chief Justice Roberts pushed the Affordable Care Act beyond its plausible meaning to save the statute" and has criticized the Affordable Care Act's birth control mandate as a "grave violation of religious freedom."

* Barrett has called abortion "always immoral," and has already ruled on two abortion-related cases, both times favoring restrictions on access. In her dissents, she urged reconsideration of two state laws: one that regulated the fetal remains from abortion procedures and another one that tightened requirements for notifying parents of minors who sought abortions.

* In 2018, Barrett joined a panel that ruled that the Army Corps of Engineers did not provide enough evidence for its decision that 13 acres of wetlands in Illinois fell under federal jurisdiction and thus blocked from development.

* In 2019, she dissented alone when a 7th Circuit panel majority rejected a Second Amendment challenge from a man who was found guilty of felony mail fraud and prohibited from possessing a firearm under federal and Wisconsin law. 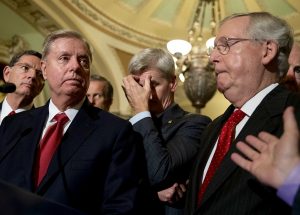 Graham and McConnell, both up for reelection, are fast-tracking the process (Drew Angerer/Getty)

* In 2020, she dissented on a decision that left intact a US district court ruling that temporarily blocked a Trump policy that disadvantaged green card applicants who apply for public assistance.

* Her history on employment discrimination cases are considered anti-worker. In 2019, Barrett ruled against a harassed Black state trans­porta­tion work­er who alleged that his fir­ing was racial­ly-moti­vat­ed, and this year, Bar­rett ruled that Grub­Hub dri­vers could not file a class action law­suit against their employer -- a significant blow to workers in the rapid­ly expand­ing gig economy.

Nomination Process
Amy Coney Barrett's confirmation process is scheduled to begin Monday, October 12th -- putting her nomination on track to be one of the fastest Supreme Court justice confirmations in modern history.

Senate Judiciary Committee Chair Lindsey Graham (R-SC) has said Barrett's nomination will be reported out of the committee on October 22nd, and Senate Majority Leader Mitch McConnell (R-KY) has stated he expects a vote before the full Senate prior to the November 3rd election.

July 14, 2021 Nineteen months after China reported its first cases of COVID-19 to the World Health Organization (WHO), most countries are still struggling to contain the deadly coronavirus. Health...

May 12, 2021 Virginia Republicans have chosen their nominee in this year’s gubernatorial contest, one of two taking place in 2021. In Saturday’s unprecedented convention process, which...