Nationwide, Republicans control two-thirds of the Governors' seats. The midterm elections, however, present an opportunity for Democrats to not only reverse that trend, but make a critical impact on the 2020 elections and the future makeup of Congress.

As a state's highest-ranking elected official, Governors are administrators of their state, responsible for dictating policy, overseeing the budget, agencies, military forces and its executive branch.  The power of each Governor varies with each state constitution, depending on his or her veto power over legislation and the official body that draws the state's electoral map in redistricting.

As chief executive of his or her state, a Governor is more similar to a US President, but on a smaller state scale (and why serving as Governor is considered the best training ground for the White House). 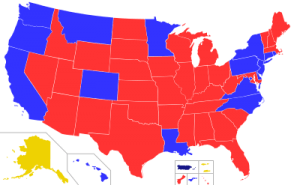 Politically, Governors are more independent, in practice, and in the eyes of the voters.  There are ten states where both state legislative chambers are controlled by one party, but have elected Governors of different party.

In midterm elections, gubernatorial elections usually follow the political environment, which is good news for Democrats.

In 2018, Democrats are favored to pick up as many as nine seats, with top pick targets in Connecticut, Florida, Georgia, Iowa, Maine, Nevada, Ohio and Wisconsin.

By contrast, Republicans, at present, are favored to pickup only one independently-held seat, in Alaska.