The wave of women running for office in 2018 continue to break records, with the number of female Democratic candidates outnumbering Republicans four to one.

Although numbers vary according to the official tracker, over 500 women have filed or are expected to file to run for the US Congress in 2018, and EMILY's List announced in February that over 34,000 women interested in running for office have reached out to the organization since Election Day 2016.

By The Numbers
Today, women make up less than 20% of Congress. Out of 535 total members, there are just 23 women Senators (D 17/R 6) and 83 women in the US House (D 61/R 22). Five women Delegates (3D, 2R) also represent American Samoa, the District of Columbia, Guam, Puerto Rico and the Virgin Islands in the House.

In state legislatures, 22.7% of State Senate and 26.4% of State House seats are held by women. 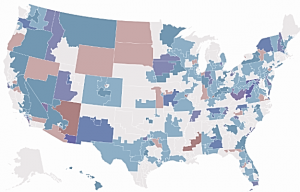 The New Yorker's April 18th Map: Click through to see where women of both parties are running.

It has been twenty-six years since the historic "The Year of the Woman" when a record two dozen new women were elected to the US House and four Democratic women to the US Senate.

That wave followed the highly publicized Anita Hill-Clarence Thomas sexual harrassment hearings, which means - in this environment - we could be expecting a (blue) tsunami.

Interested in Running for Office?
Check out the following resources and send DemList your organization's link and program information for future listing!

February 13, 2019 The Democratic National Committee meets in Washington, DC this Thursday through Saturday for its Winter Meeting to discuss organization and strategy leading up to the 2020...