The 2021 Summer Olympics came to a close yesterday with the United States winning the race for both the overall medal count and the most gold medals at the quadrennial games.

The United States has won the most overall medals for seven consecutive Olympic games.11,000 athletes representing over 200 nations competed in 33 different sports and 338 medal events. 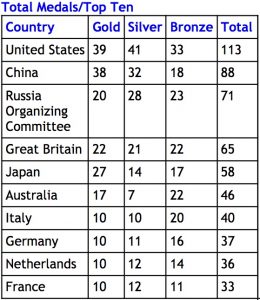 Highlights
The American women delivered some of the memorable and iconic moments of the Olympics.

The women's basketball team claimed its seventh consecutive gold, as well as gold in one of the newest events, 3x3 basketball.

The American gymnastic team won silver, with Suni Lee taking one of the game's top prizes, winning the woman's all-around competition and bronze in the uneven bars. Jade Carey won gold in the women's floor exercise, MyKayla Skinner scored a silver in the vault, and Simon Biles, who withdrew from the individual competition in all but one event, won the bronze in the balance beam.

US surfer Carissa Moore is the first woman to win a gold medal in her sport at the Olympics, and 19-year old Nevin Harrison became the first American to win a canoe or kayak sprint medal since 1992. 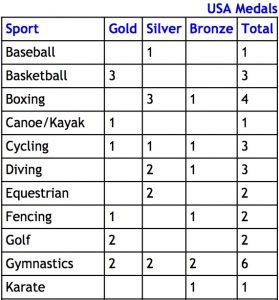 In Golf, Nelly Korda won captured the top prize, as did Lee Kiefe in fencing, and Nastasija Zolotic in Taekwondo.

The women's softball team won silver and the women's soccer team bronze, as did the cycling team.

USA women ruled in track and field, when 16 of USA's 26 medals in the category, with four golds, including the 4x400 relay, six silver and four bronze. 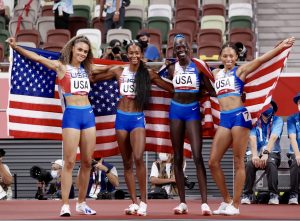 In swimming, which has long been dominated by the United States, women won 18 of the 30 medals, including two individual gold and a silver for Katie Ledecky, who is now the most decorated female swimmer of all time. Teammate Lydia Jacoby, 17, also won gold and the women's team won silver and bronze in relays.

The American men's swimming team won its 15th straight gold in the 4 x 100-meter relay team and gold in the Men's 4x100-meter medley relay. Individually they captured six additional gold, including three for Caeleb Dressel, two for Bobby Finke and one for Chase Kalisz. 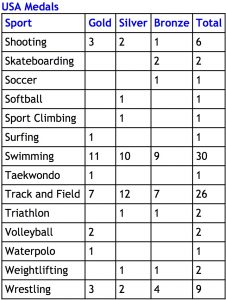 In the new category of skateboarding, USA's Cory Juneau and Jagger Easton each took bronze. 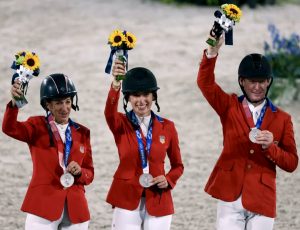