With the unprecedented upending of the electoral process caused by the coronavirus pandemic, and the shift to mail-in voting in the states, the results of the presidential election will not be complete until all ballots are counted. That could be weeks after the election.

In the critical battleground states of Michigan and Pennsylvania, where processing does not start until election day, it may take days to know the outcome.

By contrast, in the swing states of Arizona, Florida and North Carolina, which allow for advanced processing of mail-in ballots, it is anticipated that a majority of the votes will be counted on election night.

For our followers, we have compiled a comprehensive guide to when you can expect the results in each state, based on how and when the votes are received, processed and counted.  Four more days! 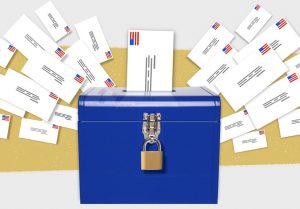 When States Begin Processing Mail-In Votes: Upon receiving completed absentee/mail-in ballots, election officials must first process the ballots before they can be counted, which generally entails verifying voter signatures and physically preparing ballots for tabulation.

This is different than counting, which doesn't begin until Election Day in 75% of the states, but the processing date provides us with insight into which states will be better prepared to announce results soon after the election.

Must Be Received on or before Election Day: To count in 28 states.

Must Be Postmarked by Election Day, but Can Be Received After: To count in 22 states and D.C. These represent 59% of the 538 Electoral College votes. This provides us with insight into which states may take longer due to extended counting of mail-in ballots.

Certification Deadline: The period after the election when officials canvass, or verify that each ballot cast was correctly counted, and certify the results. This is normally a formality, but in a close contest, we may not know until that date. 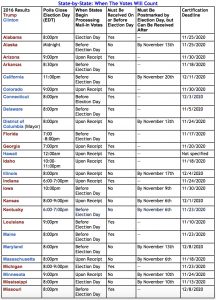 Military and overseas voters cast their absentee ballot by email, fax, or internet download, depending on the laws and deadlines of the state in which they are eligible to vote. 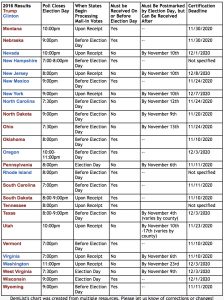 SignUp for the Daily updates on the issues, politics and the players.
Follow on Facebook, Twitter and LinkedIn
Source:  Ballotpedia, NPR, NCSL, New York Times, CNN