Amidst the firestorm of other headline news, an unhappy public is facing a partial shutdown of the United States Government.

In a December 11-16 USA Today/Suffolk University Poll of registered voters (Margin of Error/MOE +/-3%), a majority of those surveyed, 54%, oppose Trump's threatened shutdown, compared to 29% who support. In addition, by nearly 2 to 1, Americans would blame Trump and the Republicans, not congressional Democrats.

The Way It Works
Under the current budget process, Congress must appropriate funds each September 30th for the following fiscal year.  If lawmakers cannot come to an agreement, they may pass a continuing resolution (CR) that funds the government through an extended period to allow for further negotiation. 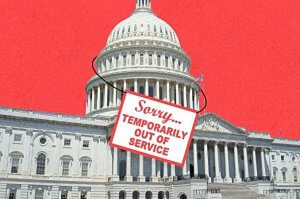 However, seven other spending bills await approval and, if lawmakers can't agree by this Friday, December 21st, then that forces a temporary shutdown of the remaining agencies.

A shutdown then becomes essentially a showdown between the two parties over aspects of the federal budget until they can be resolved.

The Hold Up
The major roadblock is President Trump's demand for $5 billion for a wall at the US-Mexico border, one of his key campaign promises and a core component of his anti-immigration policy.

Democrats have long bulked at funding for the wall, which would require 60 votes in the US Senate to pass.  Republicans currently control the upper chamber by a slim 51-49 majority. 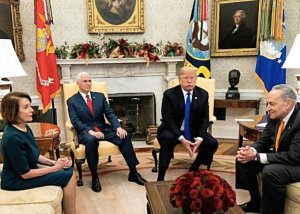 In a contentious, publicly televised meeting with House Minority Leader Nancy Pelosi (D-CA) and Senate Minority Leader Chuck Schumer (D-NY) last Tuesday, Trump defiantly declared he would be "proud to shut down the government" over the issue.

Who is Affected?
Most immediately, those who depend on government services, and those providing them. Ultimately, the public.

The result would be the furlough of approximately 800,000 government personnel.

Of those, 380,000 employees would be sent home without pay, although previous appropriations allocated for providing backpay once the shutdown ends.

Some 420,000 employees, however, are considered essential and expected to stay on the job, but are "excepted" from furloughs and won't be getting paychecks.  That includes more than 41,000 federal law enforcement and correctional officers, as well as, ironically, Customs and Border Protection agents.

Since the current budget and appropriations process was first enacted under the Budget Act of 1974, there have been 20 federal funding gaps, inluding eight full government shutdowns, lasting from one to 21 days at a time.

On a practical level, shutdowns hurt our citizens. The 2013 16-day shutdown between the Republican-controlled House and the Democratic-controlled Senate over the GOP's attempt to defund the Affordable Care Act (Obamacare), resulted in an estimated $24 billion loss to the economy.

This shutdown, which would be the third since Trump took office, would begin just four days before Christmas.

President Trump will be on a two-week vacation, observing from his Mar-A-Lago resort in Palm Beach.

On this day in history, the states ratified the 19th Amendment to the United States Constitution — giving women the right to vote.