The history of the federal minimum wage, already one of political struggle, added a new footnote to its tumultuous journey last Thursday when it became the center of a parliamentary debate in the United States Senate.

On January 22nd, President Joe Biden signed an order expanding protections for federal workers, including putting federal agencies on a path to require a $15 minimum wage for contractors within his first 100 days. 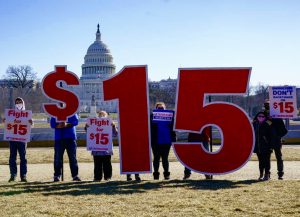 On Saturday, February 27th, the House passed Biden's $1.9 trillion COVID relief bill, titled the American Rescue Plan, including a provision raising the minimum wage to $15 an hour in stages by 2025. The provision, however, will not be included in the Senate version when it hits the Upper Chamber this week.

What Happened?
To advance Biden's relief package, Senate Democrats opted to use the "budget reconciliation" process, which fast-tracks the process for consideration of spending bills to pass with a simple majority, or just 51 votes. The budget cannot be stalled in the Senate by filibuster, and it does not require the President's signature.

When introduced on February 25th, the portion of President Biden's COVID relief bill including the $15 minimum wage provision was ruled inadmissible by Senate Parliamentarian Elizabeth MacDonough. As the nonpartisan interpreter of chamber rules, commonly referred to as the "Senate referee," the parliamentarian has broad powers over procedural issues. 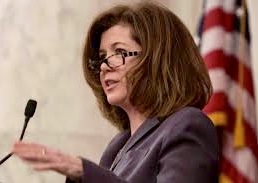 MacDonough, appointed in 2012, is the first woman to serve as Senate parliamentarian

MacDonough stated that the provision, as written, violated the strict budgetary rules limiting what can be included in a reconciliation package. The reference was to the "Byrd Rule," established in the late 1980s by former Senator Harry Byrd (D-WV), which permits blocking of provisions considered "extraneous" to reconciliation's basic purpose of implementing budget changes.

The parliamentarian's ruling can be overturned by Vice President Harris, as the presiding officer of the Senate, with the support of 50 Senators.

Some moderate Democrats, however, have indicated their lack of support for such a move, as well as the wage hike itself, and a resigned White House has told reporters that "President Biden is disappointed in this outcome", but "respects the parliamentarian's decision and the Senate's process."

An alternative proposal, led by progressive Senators Bernie Sanders (I-VT) and Ron Wyden (D-OR), to penalize large companies for not providing a $15 minimum wage to their employees, was abandoned Sunday.

While Senate Majority Leader Chuck Schumer acknowledged that the wage raise will not be included in the legislation, he declared, "We are not going to give up the fight to raise the minimum wage to $15 to help millions of struggling American workers and their families." 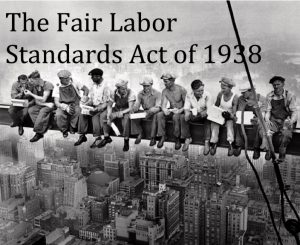 History
Congress passed the Fair Labor Standards Act (FSLA) in 1938, establishing, for the first time, a federal government minimum wage and the legal principle that individuals under law are entitled to at least a certain amount of pay for their work.

The 25 cents per hour minimum wage, signed into law by President Franklin D. Roosevelt, represented a major philosophical shift, recognizing for the first time that issues between the employer and the employee were the concern of the government.

1963: President Kennedy signed into law the Equal Pay Act, which amended the Fair Labor Standards Act to specify that workers covered by the federal minimum wage requirement were also entitled to equal pay for the same job, regardless of gender.

1989: Congress amended FLSA to apply only to businesses that produce at least $500,000 in revenue, with the exception of smaller retail businesses that either engage in interstate commerce or make goods that will be sold in other states. 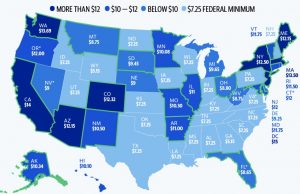 States Raise the Stakes
In the interim, the states have acted on their own to increase minimum wage levels.

Prior to the 2009 federal wage increase, ten states had already surpassed the $7.25 mark in their own legislation.

Only 17 states, however, index their minimum wage to inflation. The federal wage, meanwhile, does not adjust to the rising cost of living.

Since the federal minimum federal wage was raised to $7.25 twelve years ago, the rising cost of living has eroded the value of the minimum wage by more than 17%. 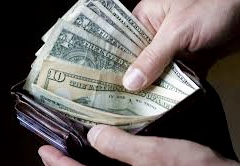 Wage Warriors: Although many states have already factored in incremental increases to $15 or above in the coming years, Washington, DC (the future 51st State) currently pays top dollar at $15 per hour. California follows at $14 per hour, with Washington and Massachusetts close behind at $13.69 and $13.50 per hour, respectively.

Of major cities outside the nation's Capital, Seattle leads with a $16.69 per hour wage for large employers with more than 500 employees. Other top cities include San Francisco, San Jose, New York City, which all have minimum wages at or above $15 per hour.

While the legislation is, for now, stalled in the Senate, the debate on the minimum wage is a larger one that extends beyond the economic and social impact of a federal wage increase, to yet another Congressional procedural consequence - the filibuster (see tomorrow's column).

The election for DNC Chair & Officers will take place at the DNC Winter Meeting February 23-26 in Atlanta, Georgia and the team we choose will have to lead a constituency far greater than...

February 3, 2020 This week promises to be an historic one in national politics and for our country. Yesterday the Kansas City Chiefs won the Super Bowl, today the impeachment trial of President...