Alabama, Arkansas and Georgia will hold their primaries tomorrow, May 24, along with runoff elections in Texas.

Here is what to watch on the ballot in each state! 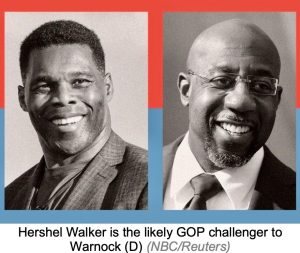 The Peach State is home to two of 2022's marquee statewide races, as evident by record early voting, with over 857,400 Georgians casting their ballots ahead of election day. 93% of those were cast in person.

That is a 168% increase in early voting over the 2018 gubernatorial primary and a 212% increase from the 2020 presidential primary. 56% of the ballots cast were for the GOP primary and 43% for the Democratic primary.

Democratic primary: Incumbent Senator Raphael Warnock was elected in the January 5, 2021 special election, defeating interim US Senator Kelly Loeffler 51.04% to 48.96% to fill the remaining term of retiring Senator Johnny Isakson (R). Now up for reelection to a full term, Warnock is uncontested in the primary. 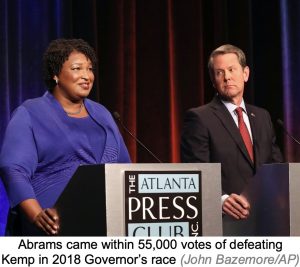 Republican primary: Incumbent Governor Brian Kemp is leading in recent polling, which puts him 32% ahead of former US Senator David Perdue, who lost his 2020 Senate reelection bid to Democrat Jon Ossoff, 50.6% to 49.4%.

Perdue entered the race in December 2021 with the support of former President Donald Trump, who targeted Kemp for defeat after he refused to overturn the 2020 presidential election results in Georgia.

If Kemp avoids a runoff, he will face Abrams in a historic rematch in November. In 2018's highest-profile gubernatorial contest, Kemp defeated Abrams 50% to 48% in an election plagued by widespread allegations of voter suppression under Kemp, who oversaw most of the process as then-Secretary of State. 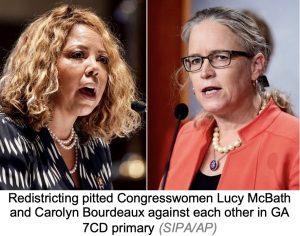 US House: The redrawn US House map under redistricting is pitting two incumbent Democrats against each other In the Seventh Congressional District: Congresswoman Carolyn Bourdeaux, elected in 2020, and two-term Congresswoman Lucy McBath. A third candidate, State Representative Donna McLeod, may help ensure this one goes to a run-off between Bourdeaux and McBath.

In the 14th District, GOP Congresswoman Marjorie Taylor Greene, who just survived a court challenge to her reelection bid due to her reported role in the January 6th Capitol insurrection, is expected to sail to renomination. Greene will face one of three Democratic contenders: Rome City Commissioner Wendy Davis, Army veteran Marcus Flowers or small businesswoman Holly McCormack.

In the US Senate GOP primary to succeed retiring Republican Senator Richard Shelby, Congressman Mo Brooks has experienced a resurgence in the polls. Trump provided an early endorsement to Brooks, who was a featured speaker at the "Stop the Steal" January 6 insurrection day rally, and the first Republican Congressman to vote against certifying the 2020 election results.

Trump withdrew his support in March, however, as polls showed Brooks losing ground to former Business Council of Alabama President and former Shelby Chief of Staff Katie Britt, who has her old boss's endorsement. Trump claimed the flip on Brooks' comments before a crowd to put the 2020 presidential election "behind you."

Also a factor in the race: businessman and former Army helicopter pilot Mike Durant, whose 1993 capture in Somalia was dramatized by the movie “Black Hawk Down.”

A May 15-16, 2022 Emerson College poll of likely voters showed Britt leading with 32%, followed by Durant at 26% and Brooks at 25%. Undecided voters made up 14% (MOE: ± 3.6%). That represents a nine-point gain for Britt since Emerson last polled in March, a seven-point decrease for Durant, and a 13-point gain for Brooks.

In the Democratic primary for US Senate, pastor Will Boyd leads with 26%, followed by former Brighton Mayor Brandaun Dean at 15%, and retired veteran Lanny Jackson at 11%. Undecided voters account for 49%.

Trump is also behind incumbent Senator John Boozman, who is handily leading three primary challengers. According to a May 2 Hendrix College survey, Boozman is leading his closest opponent, former NFL player Jake Bequette, 45% to 19%, followed by journalist Jan Morgan at 17%. A runoff in the deeply red southwestern state would increase its profile, as Bequette has centered his challenge on attacks against Boozman for being insufficiently loyal to Trump because he did not support overturning the results of the 2020 election. 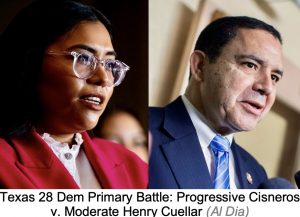 TEXAS RUNOFF
In the runoff in the 28th Congressional District, nine-term incumbent moderate Henry Cuellar and attorney and progressive immigration rights advocate Jessica Cisneros are in a tight contest for the Democratic nomination.

In the March 1 primary, Cisneros garnered 46.9% to 48.4% for Cuellar, the only Democratic member of Congress who opposes abortion rights. Cuellar is under scrutiny following a January FBI raid of his home and campaign headquarters as a part of an investigation into his ties to the state-owned oil company of Azerbaijan.

In the GOP runoff, former Deputy State Director for Senator Ted Cruz, Cassy Garcia and preschool director Sandra Whitten, who secured 23.5% and 18% respectively in the seven-candidate March 1 primary, are competing for the nomination. The general election contest in the Laredo-based district is considered a toss-up.

In a May 2-10 Dallas Morning News/UTTyler poll, Bush, the grandson of former President George H. W. Bush, trailed 35%-41% behind Paxton, who had the early endorsement of Trump. Paxton is still under a 2015 indictment on state securities fraud and is facing an ongoing FBI investigation into allegations of abuse of office.