The US House of Representatives has passed President Biden's roughly $1.75 trillion Build Back Better Act, potentially the most consequential and transformative social spending bill since the Great Society and War on Poverty in the 1960s. 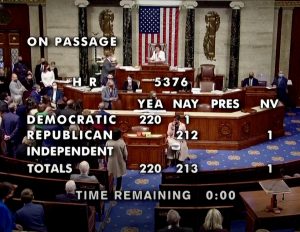 The bill, which was cut down from an original $3.5 trillion proposal, aims to tackle climate change, health care and the nation’s social safety net over the next decade.

The bill’s passage last Friday came after weeks of debate and was delayed an extra day after House Minority Leader Kevin McCarthy (R-CA) spoke for a record eight-plus hours, exercising a custom called the “magic minute” which allows party leaders to speak without time constraints when they are granted their "minute" of floor time.

Regardless, the bill passed 220 to 213, with all Republicans and one Democrat, Congressman Jared Golden (D-ME), voting against the legislation - registering his opposition to the increase in the federal tax deduction for state and local taxes.

“Under this dome, for centuries, members of Congress have stood exactly where we stand to pass legislation of extraordinary consequence in our nation’s history and for our nation’s future... With the passage of the Build Back Better Act we - this Democratic Congress - are taking our place in the long and honorable heritage of our democracy - with legislation that will be the pillar of health and financial security in America.” - Speaker Nancy Pelosi

Climate and Clean Energy: $555 billion: Together with the bipartisan infrastructure law, it makes the most significant investment in our fight against the climate crisis ever by creating jobs that build a clean energy future for our children and grandchildren.

It also includes funding for the reduction of greenhouse gases, and provides funding for lead remediation grants and replacement of lead water lines. Includes a provision to create a Civilian Climate Corps to take part in environmental and climate projects. Increases fees on the oil and gas industry and provides equipment upgrade incentives for fuel companies and distributors to support the sale and storage of biofuels. 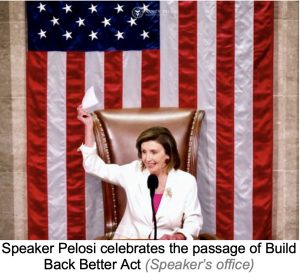 Universal Preschool and Childcare: $400 billion: Provides universal pre-Kindergarten for all 3-and 4-year-olds. Under the plan, states will receive federal funding to support a phased-in expansion of income eligibility during FY2022 – FY2024. It also offers support for child care costs – families earning less than $300,000 per year would spend no more than 7% of their income on child care; offers tax credits of up to $300 per child, per month. 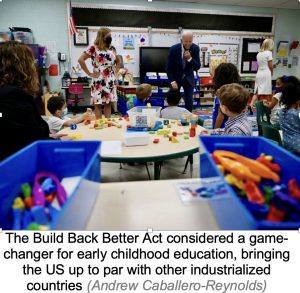 Child Tax Credit: $200 billion: Extends the Child Tax Credit for another year; one that is already helping the families of more than 61 million children and getting us closer to cutting child poverty in half this year.

The Congressional Budget Office (CBO) reported the act would raise more than $1.2 trillion in the form of increased IRS tax enforcement and other revenues, but that overall spending would lead to a net cost of approximately $160 billion over the next decade. 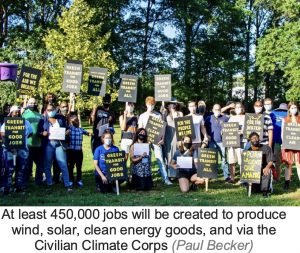 Immigration: $100 billion: Individuals living in the US prior to January 2, 2011 would become eligible for renewable parole grants for five years after paying a fee and completing security and background checks. 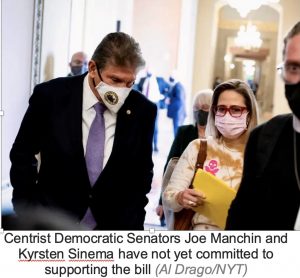 The version which was sent to the House floor included a manager’s amendment, however, which removed $2 billion in funding for administrative expenses related to the paid leave program, among other changes.

The Build Back Better Act now goes to the US Senate where it faces significant challenges and where a single Democratic defection in the split 50-50 Upper Chamber could prevent its passage.

Senate Majority Leader Chuck Schumer (D-NY) is committed to bringing the legislation to the floor before the end of the year and "act as quickly as possible to get this bill to President Biden’s desk and deliver help for middle-class families.”

Related: DemDaily: Rebuilding the Backbone of This Nation: The Infrastructure Bill 11/16/21