It also underscores the divisions and diversity of views that exist within both partisan coalitions -- and the fact that many Americans do not fit easily into either one.

The Center's political typology sorts Americans into cohesive, like-minded groups based on their values and beliefs, as well as their partisan affiliation.

Specifically, participants were categorized based on their views on politics and elections; the US and economy; government; foreign policy; race, religion and social issues; and demographics. 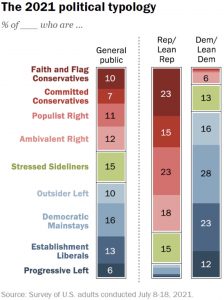 Faith and Flag Conservatives are intensely conservative in all realms; they are far more likely than all other typology groups to say government policies should support religious values and that compromise in politics is just “selling out on what you believe in.”

Accounting for 23% of Republicans and Independents who lean Republican, they are one of the most politically engaged typology groups.

They are overwhelmingly White and Christian and are among Donald Trump’s strongest supporters -- both while he was in office and today. Most say Trump definitely or probably is the legitimate winner of the 2020 election. And 79% say there has been too much attention paid to the January 6th riot at the US Capitol.

Committed Conservatives also express conservative views across the board, but with a somewhat softer edge.

One of the two smallest groups in the political typology, they constitute 15% of Republicans and Republican leaners. They are loyal to the GOP, with pro-business views, and are staunch advocates of limited government. Most (73%) identify as conservative.

However, they differ from Faith and Flag and Populist Right in prioritizing US relationships with allies in foreign policy and in taking a less restrictive approach to immigration. While they hold positive views of Trump and nearly all voted for him in 2020, they are comparatively far less enthusiastic about the former president. When asked to name the best president of the last 40 years, they are much more likely to say Ronald Reagan. 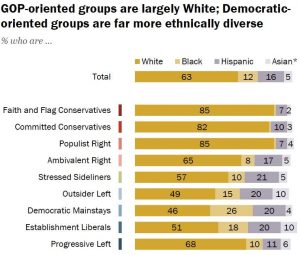 Populist Right have less formal education than most other typology groups and are among the most likely to live in rural areas.

One of the two largest GOP groups at 23%, they also are deeply conservative and reliably vote Republican. Yet they differ from Committed Conservative on two key points: They hold hard-line immigration views and are highly critical of the economic system.

They are the sole Republican-oriented group in which majorities say the economic system in the country unfairly favors powerful interests, that businesses in this country make too much profit, and that taxes on household income over $400,000 should be raised. Populist Right strongly support Trump, and most (81%) would like him to remain a prominent political figure, including 57% who say he should run for president in 2024.

Ambivalent Right are the youngest of the GOP-aligned groups and the least politically engaged. They are also the only group in which most do not identify as politically conservative.

With their combination of political values, they are cross-pressured politically: While they hold nearly down-the-line conservative views about the size of government and the economic system and lean more right than left on issues of race and gender, they are the only group on the political right in which majorities favor legal abortion and say marijuana should be legal for recreational and medical use.

As evidence of the cross pressure, a quarter of Ambivalent Right identify as Democrats or Democratic leaners, while 18% are Republicans and Republican leaners. They are much less likely to say the Republican Party represents them well or to feel like they have options to vote for political candidates who represent their views. And, unlike those in other GOP-oriented groups, they have more negative than positive feelings about Trump, with 63% saying they would prefer he not remain a major national political figure.

Stressed Sideliners makeup 15% of the public but constituted just 10% of voters in 2020. They have a mix of conservative and liberal views but are largely defined by their minimal interest, and lowest level of engagement, in politics.

While they vote at significantly lower rates than other typology groups, 45% of them cast ballots in 2020, split roughly evenly between Biden and Trump.

Progressive Left: The most liberal group, 80% of this category calls themselves liberal, including 42% who describe themselves as “very liberal.” They make up a relatively small share of the party, 12% of Democrats and Democratic-leaning independents. 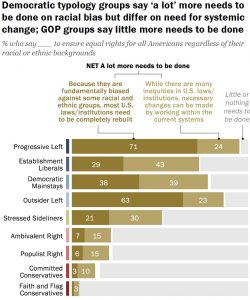 The most politically engaged segment of the Democratic coalition, they have very liberal views on virtually every issue and support far-reaching changes to address racial injustice and expand the social safety net. They are also 68% White non-Hispanic in contrast to the three other Democratic-oriented groups, which are no more than about half White non-Hispanic.

Establishment Liberals make up a significantly larger share of the party (23%), vote at high rates and are very politically attentive. While just as liberal in many ways as Progressive Left, they are far less persuaded of the need for sweeping change, tend to support more measured policy approaches, and are more likely to back political compromise than Progressive Left and, to some extent, Outsider Left.

For instance, while all Democratic groups say by wide margins that more needs to be done to ensure equal rights for all Americans, regardless of their racial or ethnic backgrounds, Establishment Liberals are somewhat more likely than other groups to say needed changes can be made within existing laws and institutions. A majority also say the party should be at least somewhat accepting of members who sometimes agree with the GOP on issues.

Democratic Mainstays, the largest Democratic-oriented group (28% of Democrats and Democratic leaners), are also the oldest on average and less likely to be college-educated than other segments. They are unshakeable Democratic loyalists and are considerably more likely than other groups to call themselves politically moderate.

While they hold nearly as liberal positions as other Democratic-oriented groups on economic issues, they diverge from others in the coalition somewhat on immigration issues and are also more invested in US military power. Black Democrats are particularly concentrated in this group, accounting for 40% of Democratic Mainstays.

Outsider Left, which account for 16% of Democrats and Democratic leaners, are young, progressive and not particularly at ease within the Democratic Party.

Though they are not quite as liberal across the board as Progressive Left and express some skepticism about government performance, their liberalism is particularly evident when it comes to race, immigration and environmental issues.

Nearly nine-in-ten (86%) say that they usually don’t feel like there are political candidates that represent their views well, with their dissatisfaction rooted in a liberal, not moderate, perspective. While not as reliable voters as other Democratic-oriented groups, when they do vote, they overwhelmingly cast their votes for Democrats, as they did for Joe Biden in 2020.

Where do you fit in the political typology? Take the Quiz Here!

Although just weeks away, the Republican party is still juggling an unprecedented field of 13 contenders — who will battle it out tonight in the third Presidential debate.