On May 23, 2022, the United States will end the implementation of Title 42, a Trump-era pandemic restriction that has effectively blocked 1.7 million migrants from entering the United States over the last two years.

The announcement, made April 1 by the US Centers for Disease Control and Prevention (CDC), was hailed by immigration rights advocates and progressives while setting off panic among some lawmakers about the practical and political ramifications of the decision. 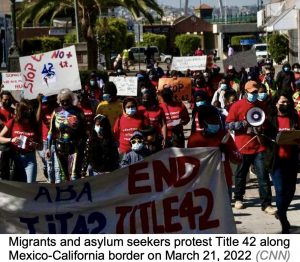 What is Title 42?
Title 42 of the United States Code is a Public Health Services Law that grants the government the ability to take emergency action to stop the “introduction of communicable diseases.”

The law, first enacted in 1944, was rarely used until the Trump Administration weaponized it in 2020 as an anti-immigration tool.

Officially implemented under the CDC, it was activated in March of 2020 to designate hundreds of thousands of migrants for “expulsion,” arguing that allowing these migrants to enter the US may increase the spread of COVID-19.

The order empowered border enforcement agencies to remove migrants crossing the border, including those hoping to apply for asylum, often without the chance to plead their case and with no documentation of any due process.

How Migration Works
Immigration policy in the United States is governed by the Immigration and Nationality Act (INA), which is contained in Title 8 of the US Code of Laws. The Act, which has been amended numerous times since it was enacted in 1952, grants permanent immigrant visas each year across various categories, including those attempting to enter the country unlawfully. 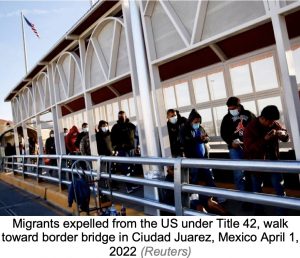 Historically, most undocumented immigrants attempt to cross at the US-Mexico southern border, with many seeking asylum as a refugee from violence or persecution in their home countries.

Federal law allows people from other countries to seek asylum in the US as refugees if they fear persecution at home. They must be present in the US and prove persecution on one of five grounds: race, religion, nationality, political opinion or membership in a particular social class (the vaguest of the five categories, it can include grounds such as sexuality or caste).

If a migrant passes what's called a "credible fear" screening, their case is referred to immigration court, where they can apply for asylum from deportation. If they don't pass the screening or are denied in court, the applicant will be exported.

If a migrant attempts to come back without documents, the penalties can be higher, including prosecution under criminal law and denial of future application for any legal immigration visa. 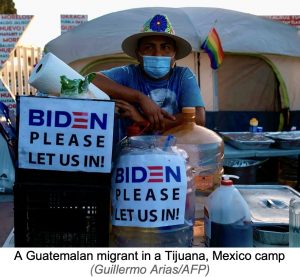 Migration Under Title 42
Under Title 42, those arriving at the border unlawfully can be immediately "expelled" and sent back to Mexico within hours or back to their country of origin within days, without any immigration due process or the chance to seek asylum.

This also means there are "no legal consequences" or record under normal immigration law, so many immigrants simply try again, ultimately fueling a significant increase in repeat border crossings.

According to US Customs and Border Patrol (CBP) data, Title 42 has been used in most of the estimated two million expulsions of migrants from Mexico, Brazil, Central America, Haiti, and Colombia since March 2020. Other asylum-seekers from South America also have been rapidly blocked at ports of entry under the policy.

The Politics
Despite supporting the end of other pandemic-related restrictions, Republicans have denounced the decision to end Title 42, citing a potentially massive influx of migrants that would add to already historic border numbers.

On April 3, the Republican-led states of Missouri, Louisiana and Arizona filed a lawsuit arguing the administration did not correctly justify its decision to end Title 42. 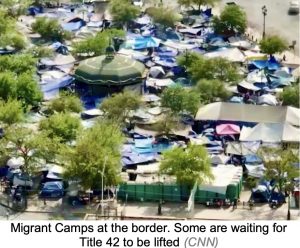 Some centrist Democrats have also criticized the move over concerns that the administration is not prepared for the ramifications of a migrant surge in what could become a political firestorm just months before the midterms.

On April 7, Senators Kyrsten Sinema (D-AZ) and James Lankford (R-OK) introduced the "Public Health and Border Security Act of 2022" to prevent the administration from lifting Title 42 without a detailed plan in place to address potential "chaos" at the border.

Democratic Senators Joe Manchin (WV) and Jon Tester (MT) were among the bill's initial cosponsors, along with Senators Mark Kelly (AZ) and Maggie Hassan (NH), who are facing tough reelection battles. The bill will not receive a standalone vote but will be tied to approval of the Senate's $10 billion COVID-19 funding bill.

The White House points to a plan released by DHS at the end of March which includes an increased capacity to process new arrivals at the border and evaluate asylum requests. DHS Secretary Alejandro Mayorkas said this month the department added at least 600 more law enforcement officers at the border and is ramping up its COVID-19 vaccination program.

The State Department is also establishing an interagency task force to ensure smugglers and migrants who may represent a danger be routed for prosecution by the Department of Justice.

May 2, 2018 On Tuesday Director of the Consumer Financial Protection Bureau, Mick Mulvaney, gave a group of banking industry executives what he felt to be sage advice on dealing with lawmakers...