Last month marked the 55th anniversary of the 1965 Voting Rights Act (VRA), considered the most far-reaching civil rights legislation in modern US history.

While the occasion may have been lost in the frey of presidential politics, the significance of the Act on history, its fate and that of voting rights in our country, is interwined with the outcome of the November 3, 2020 elections.

More than a half a century later, however, those same rights are under assault. 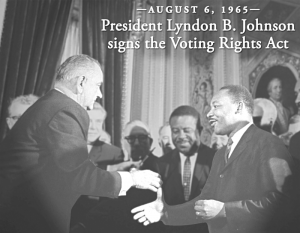 LBJ with Dr. Martin Luther King at the signing

Lyndon B. Johnson, who assumed the presidency following the November 1963 assassination of President John F. Kennedy, had been re-elected by a landslide in 1964 and made protection of voting rights a mandate of his administration.

Johnson crafted legislation that illegalized election practices that denied the right to vote based on race, and required jurisdictions with a history of voting discrimination to get federal approval for changes in their election laws before they can take effect. 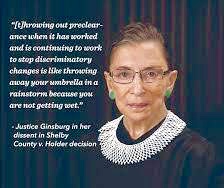 Five months later, with Dr. Martin Luther King, Jr. and other civil rights leaders present, LBJ signed the Voting Rights Act into law, calling it, "A triumph for freedom as huge as any victory that has ever been won on any battlefield." In Mississippi alone, voter turnout among African Americans increased from 6% in 1964 to 59% in 1969.

Epilogue
Nevertheless, in the ensuing decades, various discriminatory practices were still used to prevent African Americans and minorities, particularly those in the South, from exercising their right to vote.

Congress passed major amendments extending the VRA's protections in 1970, 1975, 1982, 1992, and 2006, but in 2013, the Supreme Court, in Shelby v. Holder, struck down the federal pre-clearance provision required of nine Southern states whose laws had been previously deemed perniciously politically discriminatory to minorities.

In eliminating the preclearance requirements, the ruling opened the floodgates, ushering in a wave of efforts in states to restrict voting rights. 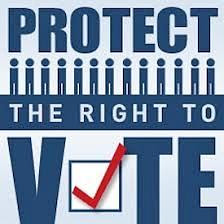 VRA, Section 2, prohibits every state and local government from imposing any voting law that results in discrimination against racial or language minorities.

A 2018 report by the bipartisan U.S. Commission on Civil Rights found that at least 23 states enacted restrictive voter laws that made it harder for minorities to vote.

The subsequent forms of voter disenfranchisement have included everything from purging minorities from voter rolls and imposing early voting hours that limit the ability of hourly-wage workers to vote, to consolidating polling places to make it inconvenient for minority voters to access the polls. By 2018, nearly a thousand polling places nationwide, primarily in predominantly African-American counties, had been closed.

They also have come in the form of mandatory voter ID laws, openly advocated by President Trump, and gerrymandering, or discriminatory redrawing of legislative districts.

While the courts have struck down some, voter restrictions still remain in place in over a dozen states -- virtually all imposed by Republicans.

At this point, Section Two of the Voting Rights Act remains the only protection against racial discrimination in voting.

Legislative Remedies
Since Shelby, there have been several bills introduced in Congress to reinstate critical VRA protections, including the 2014 and 2015 "Voting Rights Amendment Act," which did not progress beyond the committee level. 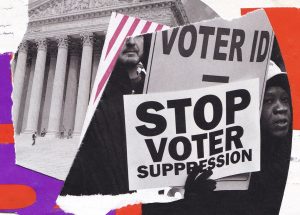 A similar bill, introduced in the Republican-controlled US Senate by Patrick Leahy (D-VT) has not passed the committee level and President Trump has said that any such legislation that passes his desk would be vetoed.

Our country, and the voting rights of all its people, are in the greatest danger since 1965. The right to vote is the single greatest privilege granted to Americans and we cannot stop until every citizen enjoys that right.

Resources
Check your registration: iwillvote.com
DemDaily: The Status of Voting in Your State