Last Friday marked the 56th anniversary of the 1965 Voting Rights Act (VRA), considered the most far-reaching civil rights legislation in modern US history.

More than half a century later, however, those same rights have been significantly weakened by both the courts and an unprecedented number of laws passed in Republican-controlled legislatures across the country.

History
The Voting Rights Act, passed on August 6, 1965, prohibited racial discrimination in voting and was designed to enforce the voting rights of racial minorities guaranteed by the Fifteenth Amendment to the United States Constitution. 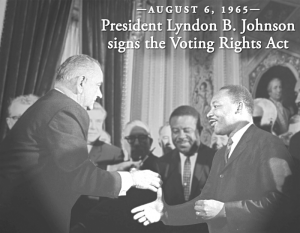 LBJ with Dr. Martin Luther King at the signing

The landmark legislation came out of the turbulent civil rights movement of the 1960s that witnessed mass resistance to decades of discrimination and oppression against African-Americans at home and at the ballot box.

Lyndon B. Johnson, who assumed the presidency following the November 1963 assassination of President John F. Kennedy, had been re-elected by a landslide in 1964 and made protection of voting rights a mandate of his administration.

Johnson crafted legislation that illegalized election practices that denied the right to vote based on race, and required jurisdictions with a history of voting discrimination to get federal approval for changes in their election laws before they could take effect. 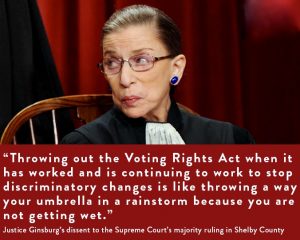 Five months later, with Dr. Martin Luther King, Jr. and other civil rights leaders present, LBJ signed the Voting Rights Act into law, calling it, "A triumph for freedom as huge as any victory that has ever been won on any battlefield." By the end of 1965, a quarter of a million new African American voters had been registered.

Prologue
Nevertheless, in the ensuing decades, various discriminatory practices were still used to prevent minorities, particularly those in the South, from exercising their right to vote.

Congress passed major amendments extending the VRA's protections in 1970, 1975, 1982, 1992, and 2006. In 2013, however, the Supreme Court, in Shelby v. Holder, struck down the federal pre-clearance provision required of states whose laws had been previously deemed perniciously politically discriminatory to minorities.

In eliminating the preclearance requirements, the ruling opened the floodgates, ushering in a wave of efforts in states to restrict voting rights.

Although several bills were introduced in Congress to reinstate critical VRA protections, including the 2014 and 2015 Voting Rights Amendment Act, they did not progress beyond the committee level. 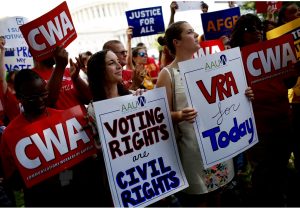 Under the administration of President Donald Trump, elected in 2016, attacks against voting rights increased exponentially.

A 2018 report by the bipartisan US Commission on Civil Rights found that at least 23 states enacted restrictive voter laws that made it harder for minorities to vote. By 2018, nearly a thousand polling places nationwide, primarily in predominantly African-American counties, had been closed.

In 2019, Congressional Democrats, now in control of the US House, passed the Voting Rights Advancement Act to reinstate the preclearance requirements struck down under Shelby. The companion bill in the Republican-controlled US Senate was blocked amid threats of a veto by President Trump.

On July 2, 2021, in a 6-3 decision along ideological lines, the US Supreme Court held in Brnovich v. Democratic National Committee that two Arizona voting laws did not violate either the Voting Rights Act or the Fifteenth Amendment. The court also outlined "guideposts" for future challenges to Section 2 of the Act, which are expected to make it significantly more difficult to challenge state voting laws moving forward. 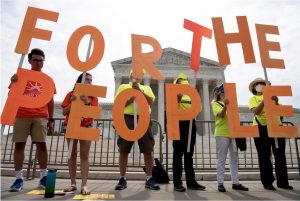 Postscript
As high profile battles over voter suppression continue to rage in the states, constituting what President Joseph Biden recently called, "the most significant test of our democracy since the Civil War," we must look to Congress to rescue our rights.

Senate Republicans, however, have successfully blocked advancement of voting rights legislation, including debate on a trio of election bills in the wee hours of the morning Wednesday before adjourning for the Summer recess.

Senate Majority Leader Chuck Schumer (D-NY) has promised that debate on the legislation, including the For The People Act, which would mitigate some, but not all, of the voter suppression provisions passed in the states, will be the "first matter of legislative business" when Congress returns in September.

In the interim, on Thursday, Texas State Senate Republicans passed a bill that will make it harder to vote by mail, impeding seniors and the disabled, and disproportionately affecting communities of color.

March 25, 2022 Former Secretary of State Madeleine Albright died this week, bringing an end to the life of a brilliant diplomat and trailblazer who was revered internationally and universally...