In January of 2007, New York Times columnist Thomas Friedman, citing 2006 as the hottest year in America since 1895, and the hottest in Britain since 1659, called for a "Green New Deal" to combat climate change.

Comparing the daunting task to President Franklin D. Roosevelt's "New Deal" in response to the Great Depression of the 1930s, Friedman said:

Throughout his presidential campaign Donald Trump called global warming a "hoax," claiming among other things, that climate change is a "joke" created "for the benefit of China." 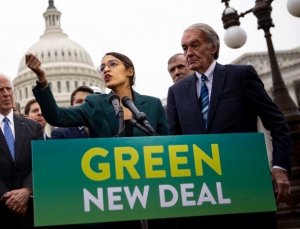 Following his inauguration in January of 2016, all information about, or reference to, climate change was removed from over 200 government webpages. In addition to withdrawing the United States from the 195-country Paris Climate Agreement, Trump has rolled back over 80 rules relating to the environment during his tenure in the White House.

In February of 2019, at the start of the 116th Congress, Congresswoman Alexandria Ocasio-Cortez (D-NY) and US Senator Ed Markey (D-MA) sponsored resolutions H.R. 109 and S.R. 59, "Recognizing the duty of the Federal Government to create a Green New Deal."

The Green New Deal proposes a broad set of economic  stimulus programs that aim to address climate change and economic inequality over a ten-year "mobilization."

According to GND FAQ sheet:  "The Green New Deal resolution is a 10-year plan to mobilize every aspect of American society at a scale not seen since World War II to achieve net-zero greenhouse gas emissions and create economic prosperity for all. It will: 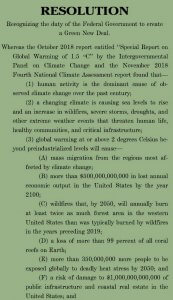 * Move America to 100% clean and renewable energy.
* Create millions of family supporting-wage, union jobs.
* Ensure a just transition for all communities and workers to ensure economic security for people and communities that have historically relied on fossil fuel industries.
* Ensure justice and equity for frontline communities by prioritizing investment, training, climate and community resiliency, economic and environmental benefits in these communities."

It will also "build on FDR's second bill of rights" by guaranteeing retirement and economic security, affordable housing, high-quality education and healthcare, and an economic environment free of monopolies.

Presidential Proponents
With the increasing public awareness and alarm around climate change, the issue is front and center in the 2020 presidential contest.

While other Democatic hopefuls, including Tulsi Gabbard, John Delaney and Jay Inslee have expressed reservations or are putting forth their own plans. Delaney, a former Congressman from Maryland, denounced the GND as "a step backwards in fighting climate change because its unrealistic goals and linkage to other unrelated policies will make it harder to do anything." 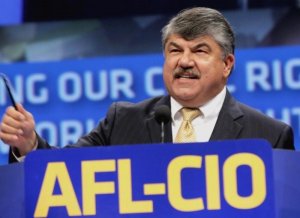 A March 8th letter addressed to Markey and Ocasio-Cortez, and signed by the ten national labor unions on the Energy Committee of the AFL-CIO, stated "We welcome the call for labor rights and dialogue with labor, but the Green New Deal resolution is far too short on specific solutions that speak to the jobs of our members and the critical sections of our economy."

Others say the AOC-Markey Green New Deal, which currently boasts 100 co-sponsors in the House, and eleven in the Senate, is a resolution, not a bill, and is intended to act as a framework for future legislation.

Whatever the end result, it is time for our politics to catch up with our planet.