Yesterday the US House officially signed off on a $480 billion increase in the federal debt capacity, a week after the US Senate agreed to the temporary increase to avoid a looming debt crisis - at least for the next two months.

The debt limit is a monetary ceiling imposed by Congress on the amount of debt that the US Federal government can incur. That borrowing cap is set at $28.4 trillion. 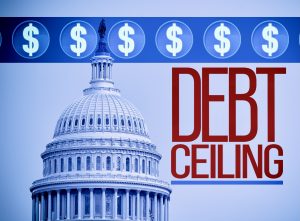 By a vote of 219-206, the House ended a week of drama and anticipation over whether the US would default on its financial obligations for the first time in history.

The temporary fix in dealing with the country's debt, however, is just that -- delaying until December 3rd the next confrontation between Democrats and Republicans on this aspect of the US budget.

The standoff over the debt ceiling comes as Congress is in a heated debate over one of the largest government spending packages in history, President Biden's $3.5 trillion Build Back Better agenda.

What is the National Debt?

The national debt is the total amount of outstanding borrowings by the US Federal government, accumulated over our history - by both Republican and Democratic administrations.

Every year, Congress passes a budget that includes government spending on defense, infrastructure, programs such as Social Security and Medicare, and salaries for federal workers. Congress also taxes people to pay for all that spending. But for years, the government has been spending more than it takes in from taxes and other revenue, increasing the federal deficit. 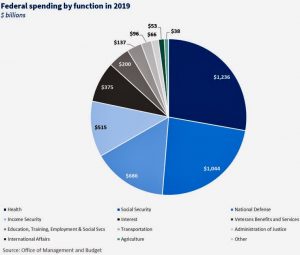 When its ongoing operations cannot be funded by Federal revenues alone, the government needs to borrow money to pay its bills. When this happens, the U.S. Treasury Department creates and sells securities. These securities are the debt owed by the Federal government. There are many different types of Treasury debt, including bills, notes, and bonds. The various types of debt differ primarily in when they mature—ranging from a few days to 30 years—and in how much interest they pay.

The United States has not run an annual surplus since 2001, and has thus borrowed to fund government operations every year since then. The debt ceiling is the statutory limit on the amount the government can borrow.

In testimony before the Senate Banking Committee on September 28th, US Treasury Secretary Janice Yellin warned of “catastrophic” consequences if Congress failed to raise or suspend the statutory debt limit by October 18th, when all resources and extraordinary measures would be exhausted.

"America would default for the first time in history. The full faith and credit of the United States would be impaired and our country would likely face a financial crisis and economic recession as a result," said Yellen. 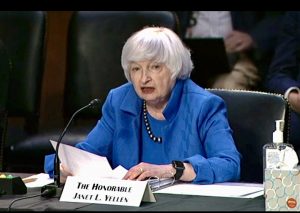 Yellen: Defaulting on debt would be "catasrophic" (NYT)

Yellin explained that interest rates on the debt would also go up and, because the US Treasury is the global benchmark safe asset, undermining confidence in the dollar as a reserve currency would have a domino effect on the economy. The interest payments of ordinary Americans on their mortgages, cars and credit cards would go up in line with higher treasury borrowing costs.

“It would be disastrous for the American economy, for global financial markets, and for millions of families and workers whose financial security would be jeopardized by delayed payments,” said Yellen.

"This would be a manufactured crisis we had imposed on this country, which has been going through a difficult very period, is on the road to recovery, and it would be a self-inflicted wound of enormous proportions."

"Senators, the debt ceiling has been raised or suspended 78 times since 1960, almost always on a bipartisan basis. My hope is that we can work together to do so again and build a stronger American economy for future generations." - Treasury Secretary Janice Yellen

It should be noted that this is not the same as a government shutdown, although the two may be politically intertwined.

A shutdown happens when Congress does not approve a new spending bill for the next fiscal year, so payments moving forward are frozen.

Government shutdowns usually are the result of a debate over certain funding programs and, as it was last month, a continuing resolution (CR) to keep funding government operations may be passed to provide more time for the parties to come to an agreement.

The CR passed by Congress on September 30th funds federal agencies at their current levels through December 3rd, the same week when a decision on the debt ceiling must be resolved.

Both extensions of time are an attempt to buy time for a compromise amid often contentious negotiations, a seemingly permanent state in Washington these days.