World leaders from 29 North American and European countries gathered in Brussels, Belgium this week for a meeting of the North Atlantic Treaty Organization (NATO) -- one that may go down, following the actions of President Trump, as the most divisive summit in the organization's near 70-year history. 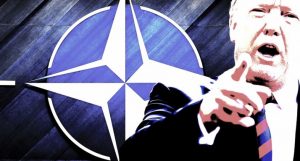 Formed in aftermath of World War II to counter the threat of Soviet expansionism, the purpose of NATO was to secure peace in Europe, promote cooperation amongst member countries, and to collectively guard their freedom.

Originally comprised of 12 member countries, it "commits its Allies to democracy, to individual liberty and the rule of law, as well as peaceful resolution to disputes."

After the collapse of the Soviet Union in 1989, NATO expanded its mission to working with non-member countries as well as international organizations, including the United Nations and the European Union (EU).  it has also continued to modernize and innovate to meet the challenges of an increasingly more complex international security environment. 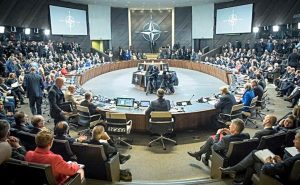 How It Works
There is no NATO army.  Each member state volunteers and pays for its own armed forces and their deployment, and is part of a cost sharing agreement that is based on a percentage of each country's economy.  NATO's goal is to have each member contribute 2% of their GDP (Gross Domestic Product) by 2024.

President Trump claims that the United States, with the largest GDP, is disproportionately paying for Europe's protection and is insisting that the contribution amount of each country increase to 4%.

What he does not understand from basic math is that increasing the percentage for all countries would not decrease the amount the United States pays, but just raise the tab for all concerned.

He also ignores the larger contributions from other countries that include providing troops, equipment and other resources, regardless of their comparatively smaller GDP and population. 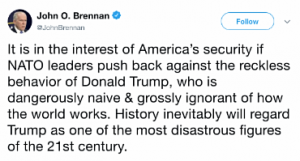 To further compound the divisions, Trump used the occasion to publicly condemn other allied countries, disgarding decades of established diplomatic norms and furthering endangering both our overall national security and international peace.

"It's like the world has gone crazy this morning," one senior European diplomat told CNN. "Trump's performance was beyond belief."

Among the most acerbic attacks, ironically, was his comment that Germany is "totally controlled" by Russia.

Trump will be meeting one-on-one with Russian President Vladimir Putin on Monday, which he said will be "an honor."

February 2, 2021 The labor movement, and the country, lost a legendary leader this week with the passing of former AFL-CIO President John Sweeney. Sweeney, who served for five terms as President...