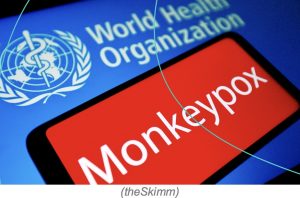 On Saturday, July 23, the World Health Organization (WHO) declared the monkeypox outbreak a global health emergency.

The announcement comes as the world continues to recover from the devastating coronavirus pandemic, which has infected 577 million and killed 6.41 million people globally.

In the shadow of COVID and its variants, which have claimed the lives of 1.02 million Americans and infected another 90 million more, the Monkeypox outbreak pales in comparison. Its unprecedented rate of spread to dozens of countries in the last two months, however, has prompted alarm by health experts.

What is Monkeypox?
The zoonotic virus, first transmitted from animals to humans, was first discovered in 1958 after outbreaks occurred in monkeys used for research. The first human case of monkeypox was recorded in 1970 in the Congo and until this year, was primarily found in parts of Central and West Africa.

There are two forms of monkeypox, a more severe central African or Congo strain, and a milder west African strain which is prevalent in the current international outbreak. 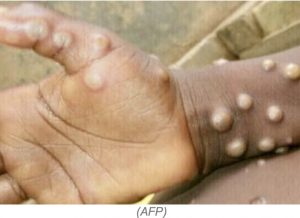 The rare infectious disease is part of the variola virus family, which causes smallpox, but has less severe symptoms. These include fever, headache, muscle aches, swollen lymph nodes, chills and exhaustion.

A few days after getting a fever, most people also develop a rash that starts with flat red marks that become raised and filled with pus. The rash changes and goes through different stages, and can look like chickenpox or syphilis, before finally forming a scab, which later falls off. On average, symptoms appear within six to 13 days of exposure but can take up to three weeks.

Few deaths have been reported in this outbreak, although some men have been hospitalized with excruciating pain linked to lesions near the genitals. Most patients recover from monkeypox in two to four weeks.

The Count
While countries in Europe have been hardest hit, the virus is now in 78 countries and territories.

The 10 most affected countries are Spain, the United States, Germany, the United Kingdom, France, Netherlands, Brazil, Canada, Portugal, and Italy. Together, these countries account for 87.8% of the cases reported globally. 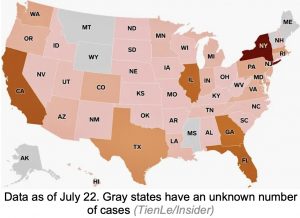 How Do You Catch It?
According to the Centers for Disease Control and Prevention (CDC), Monkeypox does not spread easily among humans and requires close person-to-person contact.

Human-to-human transmission occurs primarily through large respiratory droplets, which cannot travel more than a few feet, so prolonged face-to-face or intimate physical contact, such as kissing, cuddling, or sex is required.

Other methods of transmission include direct contact with the infectious rash, scabs, or body fluids, transference through clothing, linens and contaminated items, and from infected animals.

Although anyone can get monkeypox, the WHO reports that the outbreak has been largely among men who have sex with men who had reported having sex recently with new or multiple partners. 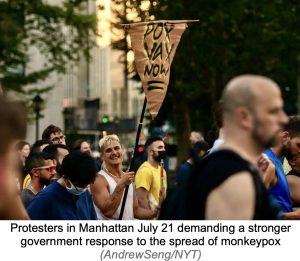 A much smaller number of cases have been reported among women and children. It is possible for the virus to be spread from a pregnant woman to a fetus.

How Is It Treated?
While there are no specific treatments for monkeypox, its genetic similarity to the much deadlier smallpox virus means the same vaccines and therapeutics can be used to prevent and treat monkeypox infections.

This means, unlike the novel coronavirus, the United States already had more than 1 million prepared vaccine doses in stockpile and enough vaccine for millions of more doses that had yet to be filled into vials. The administration has come under some criticism for shipping and regulatory delays in deploying the initial stock, however, which was stored in a Denmark facility.

Today, Health and Human Services Secretary Xavier Becerra announced that Food and Drug Administration has greenlighted approval of Bavarian Nordic’s Jynneos vaccine for treating monkeypox, making an additional 786,000 doses immediately available for distribution. An announcement of which states and jurisdictions are receiving the vaccine will be made Thursday.