This week international political, corporate and business elites met in Davos, Switzerland to for the World Economic Forum (WEF) to discuss the most pressing issues facing the world. 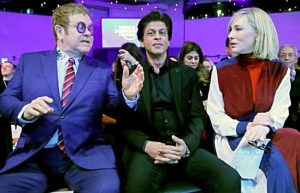 Elton John, Shah Rukh Khan and Cate Blanchett received the Annual Crystal Award for artists committed to improving the state of the world

Located on the river Landwasser, Davos is know as the highest town in the Alps and home to one of the country's largest ski resorts. The prestigious, four-day event of approximately 2,500 invited guests also draws national governmental organizations (NGOs), religious, civic and academic leaders, celebrities and media from almost 100 countries.

WEF also convenes some six to eight regional meetings each year across Africa, East Asia, and Latin America, and other annual meetings in China, India and the United Arab Emirates.

Although a coveted ticket for the global rich, with the number of billionaires on the world on the rise, the gathering of the "1%ers" has many detractors.

British Labour Party Leader John McDonnell, who surprised many by attending, said "Beyond the Davos compound many people feel the markets have been rigged against them, not for them ... When (people) are told they're coming out of a recession, growth is returning, and they don't feel like they're participating in the benefits of that growth that's when people become alienated and angry."

According to a report released by Oxfam International this week, 82% of the wealth created last year is going to the richest 1%, while the poorest half of the world - 3.7 billion people - saw no increase.  "The billionaire boom is not a sign of a thriving economy but a symptom of a failing economic system," said  Oxfam Executive Director Winnie Byanyima.

The meeting, themed Creating a Shared Future in a Fractured World, featured over 400 sessions based on four tracks: Driving Sustained Economic Progress, Navigating a Multipolar and Multiconceptual World, Overcoming Divisions in Society, and Shaping the Agile Governance of Technology.

Highlights of the conference included a speech by Indian Prime Minister Narendra Modi, who cited the three most significant challenges to civilization as climate change, terrorism and the backlash against globalization, and Alibaba founder and Executive Chairman Jack Ma on the threat of Artificial Intelligence, noting "Technology should always do something that enables people, not disable people."

IMF Director Christine Lagarde: "Finally a real panel, not amanel ... Even without testosterone, we can produce positive, constructive energy."

President Trump's scripted pro-growth, pro-America message today was generally well received by the audience - many of whom will benefit from a huge tax cut for the wealthy under the Republican-passed tax plan.

Some of Trump's unscripted remarks, however, were met with boos and hisses from the audience.

When thrown a softball question by WEF founder Klaus Schwab on how his background as a businessman influenced his leadership style, the President boasted, "I've always been very successful at making money." Then, in referencing his positive media coverage as a businessman, he said "It wasn't until I became a politician," he complained, that "I realized how, nasty, how mean, and how fake the press can be."

Trumps trip to Davos, the first time an American President has attended since Bill Clinton in 2000, comes amid strained relationships with key US allies, and concerns of an eroding US standing in the international community. Trump's appearance at Davos did nothing to change that scenario.

June 14, 2022 On Monday, the House Select Committee to Investigate the January 6th Attack held its second hearing to present the findings of its year-long investigation to the American people. The...