In the next few days, 30,000 heads of state, diplomats, delegations and activists from around the world will descend upon Glasgow, Scotland for COP26, also known as the United Nations Climate Change Conference.

COP26 is the 26th meeting of the Conference of Parties (COP), or signatories, to the United Nations Framework Convention on Climate Change (UNFCCC) and the third meeting of the parties to the Paris Agreement (CMA3). The 2021 conference, hosted by Conference Co-Presidents the UK and Italy, will meet in Glasgow October 31-November 12, 2021.

The United Nations Framework Convention on Climate Change (UNFCCC) established an international environmental treaty to combat "dangerous human interference with the climate system" and stabilize levels of greenhouse gas emissions in the atmosphere.

It was signed by 154 countries at the United Nations Conference on Environment and Development (UNCED), or "Earth Summit," held in Rio de Janeiro in 1992, and established a Secretariat headquartered in Bonn in 1994.

The treaty called for ongoing scientific research and regular meetings, negotiations, and future policy agreements designed to allow ecosystems to adapt naturally to climate change, to ensure that food production is not threatened, and to enable economic development to proceed in a sustainable manner. 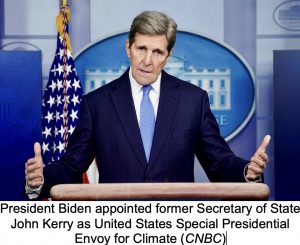 The first COP was held in Berlin in 1995, after a critical mass of nations ratified the climate convention. It was a milestone and set the stage for the Kyoto Protocol two years later, which established legally binding obligations under international law for wealthy, industrialized nations to reduce their greenhouse gas emissions.

The Kyoto Protocol was superseded by the Paris Agreement, which was negotiated at the 2015 United Nations Climate Change Conference (COP21) with 196 parties signing on to an increase in emissions targets. The groundbreaking accord meant, for the first time, rich and poor countries agreed to act, albeit at different paces, to tackle climate change.

The United States withdrew from the Paris Agreement under former President Donald Trump but rejoined under President Biden one month after his inauguration. At the time, United Nations Secretary-General António Guterres said he welcomed the return of the United States as restoring the “missing link that weakened the whole."

The goal of COP26 summit is to bring parties together to accelerate action towards the goals of the Paris Agreement and the UNFCCC, to reach global net-zero carbon emissions targets by mid-century, and to mobilize public and private finance to support those on the frontline of the climate crisis. 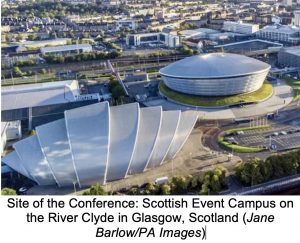 They will be joined by thousands of diplomats from nearly 200 countries, along with business leaders, academic experts and activists like Greta Thunberg.

President Biden will be joined by White House National Climate Advisor Gina McCarthy and Special Presidential Envoy for Climate John Kerry, who has been engaging in climate diplomacy worldwide over the last ten months. 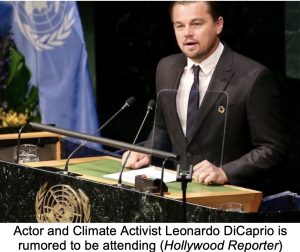 House Speaker Nancy Pelosi, who delivered a keynote address at the Opening Ceremonies of the Pre-COP26 Parliamentary Meeting hosted in Rome, Italy on October 8th, will be leading a delegation of Members of Congress to Glasgow.

Republicans in Congress, for the first time ever, are organizing a GOP-only delegation, led by Garret Graves (LA), Ranking Member on the Select Committee on the Climate Crisis.

Corporations are not missing the opportunity to brand their support for the event, including Amazon, McDonald’s, Mars, Starbucks, LinkedIn, Microsoft and United Airlines. Even Bill Gates and Jeff Bezos are expected to attend.

DemList is also headed to COP26 -- tomorrow! We will resume publishing and reporting to you on all developments at the historic Climate Change Conference from Glasgow on Monday.

The conference comes as alarm over the earth’s climate reaches a new high. Scientists say nations must take immediate action to drastically reduce emissions in order to avoid catastrophic impacts of climate change such as devastating sea-level rise, longer and more intense heatwaves, and widespread species loss, among other consequences.

In the first meeting since the US rejoined the Paris Agreement, all eyes will be on President Biden, who is expected to take a significant role in the negotiations, and whose stated goal is to slash emissions in half by 2030 and get to net-zero by 2050.

It also comes as the administration struggles at home to pass its sweeping climate bill in Congress, failure of which could damage US credibility on the international stage.

DemList will not publish October 28th and 29th, but will resume Monday from Glasgow

DemDaily: A Walk in the Park