The Senate Judiciary Committee recently held hearings on S.1241: Combating Money Laundering, Terrorist Financing, and Counterfeiting Act of 2017, which calls for regulation and oversight on digital currencies like Bitcoin.

How Does It Work?
Hard currency such as the US dollar is managed by a central bank (in the US, the Federal Reserve Bank), which steadies rates and manages supply and demand.

By contrast Bitcoin operates on a peer-to-peer network, connecting buyers and sellers anonymously and directly without an intermediary or financial oversight. These transactions are verified by network encryption keys and recorded in a publicly distributed ledger called a blockchain.

In the blockchain, bitcoins are registered to a numeric address, which is a randomly picked private key which ensures its safe use. The private key serves as your secret number, like a password, that unlocks your bitcoin wallet and allows you to send bitcoins. Your wallet is also assigned a public key, which is like your bank account number, and what you provide to others for transactions. 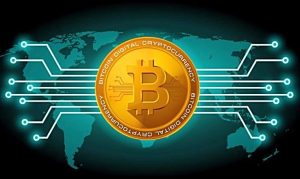 Bitcoins can also be created or "mined" with specialized software or powerful processors. Miners either compete with one another or work together in groups to solve a mathematical puzzle.

The first miner to solve the particular puzzle is rewarded with new bitcoins. The number of bitcoins will eventually be capped at 21 million.

History
Bitcoin was first introduced online in 2009 as an open-source technology invented by Satoshi Nakamoto.

Like stock, the value of bitcoins has gone through a series of bubbles and busts, from $.30 US in 2011, to a peak of $1,242 US in 2013, followed by several cycles of appreciation and depreciation before stabilizing in the last two years.  With cryptocurrency currently on an historic rise, a bitcoin today is valued at approximately $15,326 US.

Although Bitcoin was the the first, there are now close to 1,400 cryptocurriences, including Ripple (RXP), Ethereum, Cardano, NEM, Stellar, LiteCoin, TRON, IOTA, DASH, NEO and Monero, among others.

Over 2,000 merchants, who pay little or no transaction fees, currently use bitcoin, as well as Companies like Microsoft, Virgin Airlines, WordPress, Paypal and Subway. 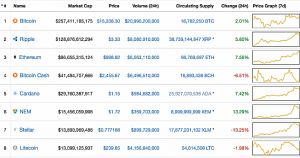 Financial institutions have shied away from formal use of virtual currency, but Goldman Sachs recently broke the Wall Street barrier by becoming the first to announce plans to launch a cryptocurrency trading desk.

Oversight
Unfortunately, the decentralization and confidentiality of cryptocurrency also make it an ideal vehicle for criminal organizations to launder money and pay for illicit activities -- prompting the increased call by regulatory and government agencies for some form of protection against the cyber crime.

The Senate Bill, originally introduced by Senator Chuck Grassley (R-IA) and Senator Diane Feinstein (D-CA) in May, is aimed at combating online financial crime by amending Anti-Money Laundering (AML) Laws under the Bank Secrecy Act (BSA) to include digital currencies and institutions in the required reporting of transactions of $10,000+ to or from the US.

As with the early days of the internet, much about cryptocurrency is still uncharted territory and it is unclear what long-term impact the bill or other regulations will have on digital currency users in the US and abroad.

In the interim, investors and innovators are smiling all the way to "the bank."