Tuesday night's Democratic presidential debate at Otterbein University in Westerville, Ohio made clear that Elizabeth Warren -- at least by her rivals -- is considered the frontrunner.

The Massachusetts Senator's numbers have surged in recent weeks, putting her neck and neck with former Vice President Joe Biden (DE), who has maintained frontrunner status since entering the race. 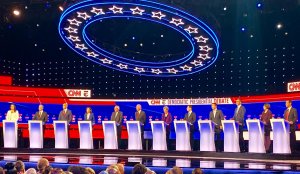 Of the twelve candidates on stage, the largest number in history for a presidential primary debate, Warren dominated the spotlight, with almost 23 minutes of speaking time, compared to Tom Steyer with seven.

This was in part due to her allotted 45 additional seconds for response and rebuttals, and in part to the less disciplined format of the moderators -- CNN's Anderson Cooper and Erin Burnett, and Marc Lacey of The New York Times.

While the evening provided some of the distinguishing performances needed to sustain the top contenders to the next stage, the crowded dais did little to boost the profile of second tier candidates struggling to make it to November's debate.

The Highlights
The first question, on impeachment, provided the candidates a forum to include their opening statements - which were not formally allowed in this debate due to the number of candidates and time constraints.

All echoed, with outrage, their support for impeaching President Trump, while underscoring a fair process that, as Senator Cory Booker (NJ) said, must "be about patriotism and not partisanship"...but one that "brings our country together, doesn't rip us apart."

Billionaire Tom Steyer (CA), who has led a private "Need to Impeach" movement for the last two years: "I started (the) movement, because impeaching and removing this president is something that the American people are demanding. They're the voice that counts." 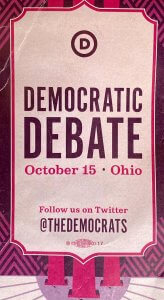 Commentator Anderson Cooper used the issue to bring up "Trump's attempts to get political dirt from Ukraine on Vice President Biden and his son, Hunter," which are now the center of the impeachment probe against the president.

Biden: "Rudy Giuliani, the president, and his thugs have already proven that they, in fact, are flat lying. What we have to do now is focus on Donald Trump... He's going after me because he knows, if I get the nomination, I will beat him like a drum."

Warren took the most fire on the issue of her "Medicare for All" plan, and criticisms on the lack of clarity regarding its funding.

Commentator Marc Lacy to Warren: "You have not specified how you're going to pay for the most expensive plan, Medicare for all. Will you raise taxes on the middle class to pay for it, yes or no?"

Warren: "So I have made clear what my principles are here, and that is costs will go up for the wealthy and for big corporations, and for hard-working middle-class families, costs will go down."

Mayor Pete Buttigieg (IN) jumped on her response, saying "Well, we heard it tonight, a yes or no question that didn't get a yes or no answer...Your signature, Senator, is to have a plan for everything. Except this."

Warren also took fire on her "wealth tax" plan, which calls for a 2% tax on on wealth over $50 million.

Former Congressman Beto O'Rourke (TX): "Sometimes I think that Senator Warren is more focused on being punitive and pitting one part of the country against the other instead of lifting people up and making sure that this country comes together around those solutions." 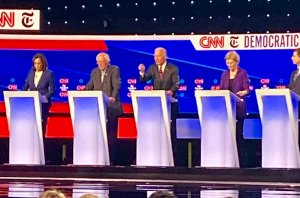 Senator Kamala Harris (CA) scored a winning moment when she turned the discussion to women's reproductive health care: "There are states that have passed laws that will virtually prevent women from having access to reproductive health care...poor women, women of color will die, because (of) these Republican legislatures...People need to keep their hands off of women's bodies."

In one of their few direct exchanges, Biden challenged the ambition of Warren's plans, adding he was "the only one on this stage that has gotten anything really big done. We all have good ideas. The question is, who is going to be able to get it done?"

Warren responded, pointing to her role in establishing the Consumer Financial Protection Agency. In his most animated response, Biden countered he had helped her pass the legislation, saying he "went on the floor and got you votes."

Warren: "I am deeply grateful to President Obama, who fought so hard to make sure that agency was passed into law."

An almost buoyant Senator Bernie Sanders (VT), in his first major appearance since having a heart attack, stayed away from direct attacks on Warren, despite the fact that her rise appears to be at his cost.

On commentator Erin Burnett's question about his health as a candidate, he gestured with hands raised, "I'm healthy, I'm feeling great ...We are going to be mounting a vigorous campaign all over this country. That is how I think I can reassure the American people."

When Cory Booker jokingly interjected that Sanders also supports medical marijuana, Sanders shot back, "I'm not on it tonight." 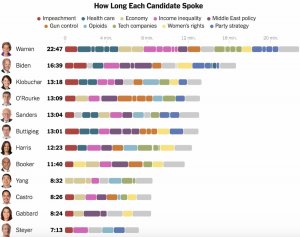 Like Booker, Harris focused more on attacking Trump and projecting unity throughout the debate, but on the subject of breaking up tech companies and imposing rules around corporate responsibility, she turned on Warren.

Harris pressed Warren on why she had not joined in supporting Harris's call to have Twitter ban Trump, "who has 65 million Twitter followers and is using that platform as the president of the United States to openly intimidate witnesses, to threaten witnesses, to obstruct justice."

Buttigieg, who had one of the most aggressive performances of the night, challenged O'Rourke on the practicality of his automatic, mandatory buyback program for assault weapons.

O'Rourke responded by a call to follow the inspiration of those marching and demanding action and "not be limited by the polls and the consultants and the focus groups."

Buttigieg: "The problem isn't the polls. The problem is the policy. And I don't need lessons from you on courage, political or personal."

Businessman Andrew Yang (NY), who earlier clashed with Warren on the subject of automation, spoke passionately about the opioid crisis and the need to decriminalize opiates for personal use. "We have to let the country know this is not a personal failing. This was a systemic government failing. And then we need to open up safe consumption and safe injection sites around the country, because they save lives."

Almost all were united in their condemnation of Trump over Turkey and the withdrawal of US troops from Syria, with the exception of Congresswoman Tulsi Gabbard (HI), who supports withdrawal. 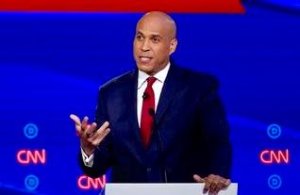 Booker: "We've got one shot to make Donald Trump a one-term president" (AP)

Gabbard: "Donald Trump has the blood of the Kurds on his hand, but so do many of the politicians in our country from both parties who have supported this ongoing regime change war in Syria that started in 2011."

Former HUD Secretary Julian Castro (TX) agreed, "The first thing is we got to boot Donald Trump out of the Oval Office so that people will trust us again...think about how absurd it is that this president is caging kids on the border and effectively letting ISIS prisoners run free."

Biden closed out the final question on a strong note, "We have to restore the soul of this country...this president has ripped the soul out of this country, divided us in ways that are absolutely outrageous...So for god's sake, get up. Get up and remember, this is the United States of America. There's nothing, nothing we're unable to do when we decide we're going to do it."

8.3 million television viewers tuned in for the debate, the lowest ratings to date. There are 19 presidential candidates remaining in the race.

The Cabinet – Nine of the 15 Cabinet or Executive Departments heads have now been confirmed, as well as five of the seven “Cabinet-level” positions.