In a devastating revelation last night, a draft opinion was leaked of the US Supreme Court's decision to strike down the landmark 1973 Roe v. Wade abortion rights decision.

If passed as written for the majority by conservative Justice Samuel Alito, then the federally-protected constitutional right to an abortion, which has been the rule of law for almost 50 years, would be overturned and the authority to implement abortion laws would be turned over to individual states. 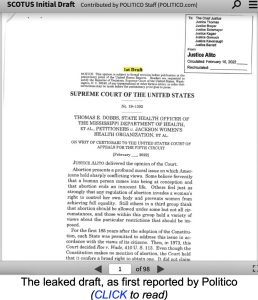 The leaked draft, dated February 10, 2022 and first reported by Politico, is the first known breach of its kind in the court's 232-year history.

Under court procedure, the justices would have held a preliminary vote after oral arguments were presented in the case on December 1, 2021. The final legal ruling is not expected until June. Although in the course of finalizing an opinion justices may change their votes, four of Alito's fellow conservatives -- Justices Clarence Thomas, Neil Gorsuch, Brett Kavanaugh and Amy Coney Barrett -- concurred with the draft.

While Chief Justice John Roberts is expected to dissent, the other conservatives already have the majority for passage. 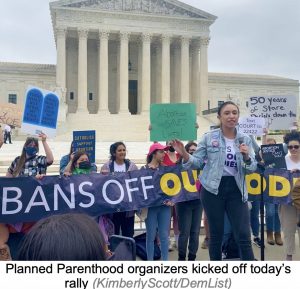 In a statement from the Court this afternoon, Justice Roberts confirmed the authenticity of the draft, but clarified "it does not represent a decision by the Court or the final position of any member on the issues in the case...To the extent this betrayal of the confidences of the Court was intended to undermine the integrity of our operations, it will not succeed.” Roberts has called for an investigation into the source of the leak. 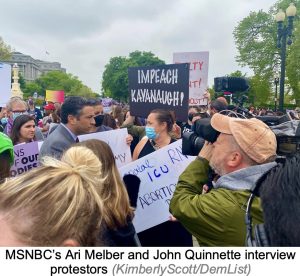 Background
Under the Supreme Court's landmark 1973 decision in Roe v. Wade, the court said states could not ban abortions before fetal viability, the point at which the fetus can survive outside the womb, at around 24 weeks.

The case was the first to establish abortion as a fundamental right protected by the Due Process and Liberty Clauses of the Fourteenth Amendment.

Roe was significantly weakened In 1992, in a bitter 5-4 decision by the Supreme Court in Planned Parenthood v. Casey. While the Court preserved what it called Roe’s “essential holding” -- that women have a constitutional right to terminate their pregnancies until fetal viability -- it discarded the trimester framework in favor of a viability analysis, thereby allowing states to implement abortion restrictions that apply during the first trimester of pregnancy.

The Court also replaced the strict scrutiny standard of review for laws regulating abortion set by Roe, with an "undue burden" standard.

The Consequences
A reversal of Roe would set off a wave of restrictive laws across the country, with as many as 26 states already poised to ban all or nearly all abortions. 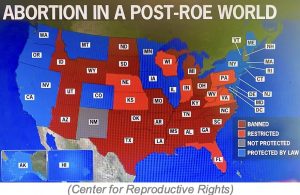 Of those, 13 states, primarily in the south and midwest, have "automatic trigger" laws that would immediately render abortion illegal upon confirmation of SCOTUS' decision.

16 states and DC have laws on the books that will protect abortion rights should Roe go down.

The ramifications for other individual rights, however, are also significant as Alito's draft opinion attacks the right to privacy grounded in Roe and the rights guaranteed under the Fourteenth Amendment. 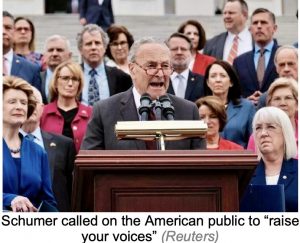 The Outlook
Senate Majority Leader Chuck Schumer decried the opinion this afternoon, saying "the Supreme Court is poised to inflect the greatest restrictions of rights in the past fifty years -- not just on women, but on all Americans. Under this decision, our children will have fewer rights than their parents."

The pro-choice Senators immediately called for reconsideration of the Women's Health Protection Act (WHPA), legislation that would codify abortion access nationwide by creating a statutory right for health care providers to provide, and a corresponding right for their patients to receive, abortion care -- free from restrictions and bans.

The legislation passed in the US House last September but fell short of the 60 votes needed to surpass the filibuster and succeed in the US Senate.

September 25, 2019 At 5:00pm yesterday House Speaker Nancy Pelosi spoke to the nation, announcing the initiation of “a formal impeachment inquiry” into the actions of President of the...