If you want to understand the history of the civil rights movement, the progressive movement, and how to build your own movement -- then you will want to check out Heather Booth Changing the World.

Heather Booth, a renowned organizer and activist, began her remarkable career at the height of the Civil Rights movement. Through her life and work this inspiring film explores many of

the most pivotal moments in progressive movements that altered our history over the last fifty years -- from her involvement with Fannie Lou Hamer and the Freedom Summer Project, to her founding of the JANE Underground in 1964, to her relationships with respected leaders such as Julian Bond and Senator Elizabeth Warren. 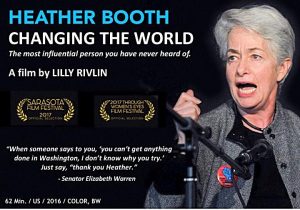 Meet Heather and learn why she has been an inspiration to thousands of young activists!  If you can't join us, catch the film at an upcoming showing or order a copy!

November 30, 2021 Last week, legendary Vermont Senator Patrick Leahy became the sixth US Senator to announce his retirement from Congress’ Upper Chamber. Leahy’s seat is one of 34 of...

August 21, 2020 The last night of the 2020 Democratic National Convention transcended the unprecedented challenges of a virtual convention to bring the inspiration, energy, promise and hope that...