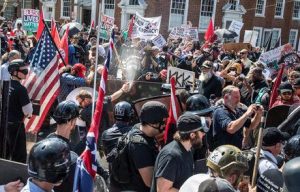 Saturday
In Charlottesville, Virginia, a "Unite the Right" rally protesting the removal of a statue of Robert E. Lee, the leader of the Civil War's Confederate army, turned into a full-blown riot.

Torch-wielding white supremacists violently clashed with police and counter-protestors, ending when one drove his car into the crowd.

In the end, 32 year-old counter-protestor Heather Heyer was killed, over 30 people were injured, and two responding state troopers were killed when their helicopter crashed.

Saturday afternoon President Trump addressed the nation, condemning the "egregious display of hatred, bigotry and violence on many sides."

The president's remarks, which failed to call out the white nationalists and neo-Nazi groups by name, were met with a firestorm of criticism from both parties.

Sunday
The White House released a statement saying the President "condemns all forms of violence, bigotry and hatred and of course that includes white supremacists" and extremist groups. 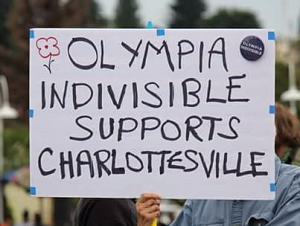 Monday
The first of nine members of Trump's American Manufacturing Council quit over his equivable response to Charlottesville.

President Trump held a press conference, saying "Racism is evil," this time adding "those who cause violence in its name are criminals and thugs, including the KKK, neo-Nazis, white supremacists and other hate groups."

Tuesday
President Trump backtracked on Monday's statement, reiterating his earlier claim that anti-fascist protesters shared equal blame. "What about the alt-left who came charging at the alt-right?" he said angrily.

DemDaily: Back in the House

April 16, 2021 It has been a rough year, but Democrats are back in the house, and our country and its citizens are on the road to recovery. Throughout all, we have endeavored to keep you updated...