The acrimonious relationship between President Trump and the media is no secret, but a recent report out by the Morning Consult underscores the increasing polarization between how the President's party and Democrats view certain national media brands. 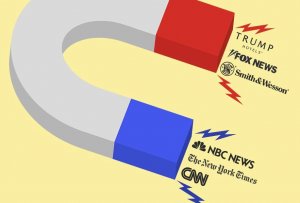 News outlets make up 12 of the 15 most politically-polarizing brands tracked by the Morning Consult in a July 1-August 8, 2019 poll among self-identified Democrats and Republicans, with an average of 13,419 survey respondents per brand.

The findings are similar to 2018 data, but the political polarization has grown by double digits for some brands.

Democrats also favored the New York Times, the Washington Post and major news outlets, while Republicans held more negative views of every media outlet on the list except for Fox News.

Trump relentlessly attacked the mainstream media on air and online during his campaign, and since elected, in a vicious, crude and often childish manner unprecedented for the occupant of the White House. 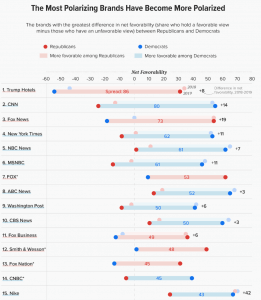 Trump's animus stems from the media's attempts to hold him accountable for now over 11,000 documented, blatant lies, as well as their coverage of his potentially impeachable actions in office.

As evident by the numbers, Trump has successfully turned his supporters against traditional media, and now is expanding his targets to social media platforms and to reporters themselves.

According to a document reviewed by Axios in September, a network of Trump allies are openly trying to raise at least $2 million to investigate "CNN, MSNBC, all broadcast networks, NY Times, Washington Post, BuzzFeed, Huffington Post, and all others that routinely incorporate bias and misinformation into their coverage. We will also track the reporters and editors of these organizations."

While Trump's war on the media is unlikely to affect the reporting of journalists and media outlets themselves, the President's rantings and retributions continue to divide an already polarized nation as we approach what will undoubtedly be one of the most contentious presidential elections in history.

July 31, 2019 Round one of the second Democratic presidential debate was a much more disciplined, substantive and passionate event than debate one, providing a voice for all the contenders in a...

June 13, 2019 House Speaker Nancy Pelosi, in this morning’s press conference, unveiled the latest list of legislation that has passed the US House, but is being “buried” in US...