This week marks the anniversary of the 1965 Voting Rights Act, considered the most far-reaching civil rights legislation in U.S. history.

More than a half a century later, however, those same rights are endangered.

From the firebombing of black churches across the south and deaths of three Mississippi volunteers in during the "Freedom Summer" of 1964, to the brutal beatings of activists during the peaceful voting rights march from Selma to Montgomery, Alabama in March of 1965, Americans were outraged at the violence sweeping the country. 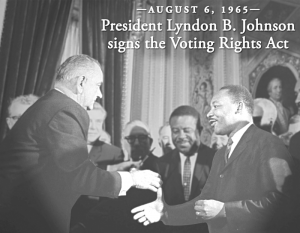 Lyndon Johnson, who assumed the presidency following the November, 1963 assassination of President John F. Kennedy, had been re-elected by a landslide in 1964 and made protection of voting rights a mandate of his administration.

Johnson crafted legislation that illegalized election practices that denied the right to vote based on race, and required jurisdiction with a history of voting discrimination to get federal approval for changes in their election laws before they can take effect.

Epilogue
Nevertheless, in the ensuing decades, various discriminatory practices were used to prevent African Americans, particularly those in the South, from exercising their right to vote.

Congress passed major amendments extending the VRA's protections in 1970, 1975, 1982, 1992, and 2006, but in 2013, the Supreme Court, in Shelby v Holder, struck down the federal pre-clearance provison required of nine Southern states and their voter laws.

Since the ruling numerous states, including Alabama, Arizona, Arkansas, Kansas, North Carolina, North Dakota, Ohio, Wisconsin and Texas have passed laws reversing earlier VRA protections and, in some cases, enacted more aggressive voter suppression laws.  While the courts struck down some, voter restrictions stll remain in place in over a dozen states.

Subsequent legislation to reinstate critical VRA protections, including the 2014 and 2015 "The Voting Right Amendment Act" have been introduced in Congress, but did not progress beyond the committee level.

In May of this year President Trump formed The Presidential Advisory Commission on Election Integrity charged with "producing a set of recommendations to increase the American people's confidence in the integrity of our election systems" -- but considered by opponents to be an effort to further supress voter access to the polls.

The right to vote is the single greatest privilege granted to Americans and we cannot stop until every citizen enjoys that right.

Links
ACLU: Petition to Restore the Voting Rights Act
DemDaily: Voter Integrity or Supression?
DemDaily:  It was the summer of 1964 ...

With the final “super Tuesday” 6-state primaries and caucuses June 7th, Sanders and Clinton have unleashed a wave of campaign ads.

October 6, 2017 The playoffs for Major League Baseball’s World Series, first held in 1903, began this week, marking one of the most excited and anticipated months in American sports. The MLB...

October 16, 2018 There are 35 of the 100 US Senate seats up for election November 6, 2018.  With every Trump drama, speculation on which party will ultimately control the Senate has shifted. The...