Midterm elections are traditionally considered a referendum on the party in the White House and this one, with history's most controversial occupant, is no exception.

As of yesterday 24 million people had voted early -- almost twice as many as the 2014 midterms. An estimated 43% of those are Republicans, 41% Democrat and 16% other. 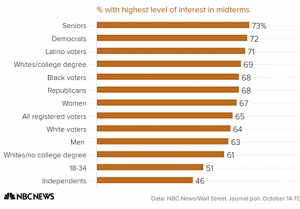 With reported record highs in voter enthusiasm, the question is who is voting and why are they motivated to go to the polls?

Who is Motivated?
According to an October 14-17 NBC News/Wall Street Journal poll (MOE: 3.2%), 72% of Democrats say they have a high interest in the midterms, compared to 68% of Republicans.

By demographic, seniors, Latino voters, college-educated whites and African Americans are the most enthusiastic.

Among all likely voters, however, Democrats hold a significant advantage going into the election.

When ask "Who should control Congress?"," Democrats hold a 9-point lead over Republicans. 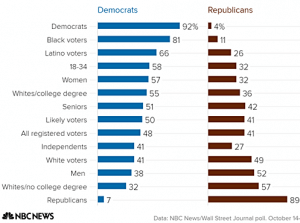 What is motivating the electorate?
According to RealClearPolitics' average of seven top polls conducted between September 27 and October 30th, 54.4% of US adults surveyed felt the country is on the wrong track, compared to 39.6% that believe it is headed in the right direction.

This is further reflected in NBC/WSJ's breakdown of issues of importance to voters, which places "Changing Washington" third at 14%, after the Economy & Jobs (21%), and Healthcare (17%).

Other top issues included: Looking Out for Middle Class (12%), Immigration (11%), and Guns, Foreign Policy & Terrorism, and Abortion, all at 3%.

In the media wars, healthcare is the number one subject of political ads. Between September 18th and October 15th, nearly half (45.9%) of ads in federal races mentioned the subject, while nearly a third (30.2%) of gubernatorial airings did the same. 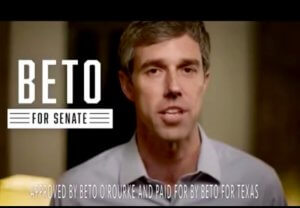 According to the Wesleyan Media Project, among ads aired by candidates, parties, and outside groups in congressional and gubernatorial campaigns, Democrats sponsored 208,000 ads in House races versus 128,000 from pro-Republican forces.

The election is in five days.  Make your vote count.