As one of two gubernatorial battle grounds this year, Virginia was already the focus of national attention as a bellweather for the political mood of the electorate -- but the unexpected results of yesterday's Democratic and Republican primaries will have political pundits scrambling for the precinct breakdown.

The surprise is not with the end result, but with the margins. 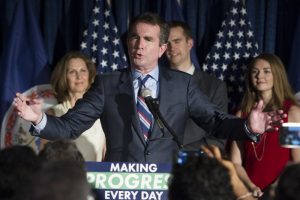 Just One Month Ago
A pre-primary May 9-14 Washington Post-Schar School Poll showed Democrats Tom Perriello and Ralph Northam at an essential dead heat @ 40%-38%.

Instead Northam swept up the Democratic nomination by an unexpectedly wide margin of over 11%, while Gillespie's lead over Stewart closed to under 1% in the end for the GOP nod.

Results of Democratic and Republican Primaries 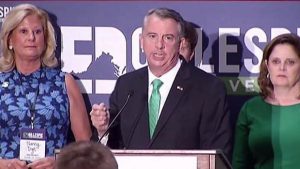 Northam and Gillespie will face off in November to succeed Virginia's term-limited, incumbent Democratic Governor Terry McAuliffe  -- who approaches the final months of his term with an approval rating of 52%+ and over 83% among Democrats.

What Does it Mean for the General Election?
The WashPo-Schar May poll showed both Northam and Perriello beating Gillespie by double digits in the general. Let's hope that part of the poll sticks.

More analysis on the results to come.