The Virginia Governor's race, one of two gubernatorial elections up in 2021, has moved into the "Toss Up" category, as the numbers in 2021's marquee race tighten alongside a decline in President Biden's approval rating.

An Emerson College/Nexstar Media Group poll, conducted September 13-14, 2021, showed former Governor Terry McAuliffe (D) leading Republican candidate Glenn Youngkin 49% to 45% among likely voters (Margin Of Error +/- 3.4%). Two percent (2%) of voters plan to vote for someone else, and 5% are undecided. Among those who are undecided, 63% lean towards Youngkin, and 37% lean towards McAuliffe.

While in the New Jersey governor's race, incumbent Governor Phil Murphy (D) holds a comfortable 13% lead over challenger Jack Ciattarelli (R), the results in the competitive Virginia race is considered much more of a preview of the mood of the electorate going into the 2022 midterm elections.

In 2019, voters in the Old Dominion sealed the state's final transformation to solidly blue by flipping both legislative chambers to Democrats, giving them their first trifecta since 1994. This built on Democrats' strong record of winning every statewide election in Virginia since 2009.

Although Virginia had voted Republican in every presidential race since 1968, shifting demographics and rapid population growth over the last decade thrust the state into the battleground category.

Virginia is the only state in the union that limits its governor to one consecutive term, making current Governor Ralph Northam (D) ineligible for reelection.

Terry McAuliffe, who served as the 72nd Governor of Virginia from 2014 to 2018, left office with a 55% approval-36% disapproval rating. Popularly known as the "Jobs Governor," McAuliffe is credited with bringing more than $20 billion in new capital investment and 200,000 new jobs to the Old Dominion State. In 2017, McAuliffe was named "Public Official of the Year" by Governing Magazine. 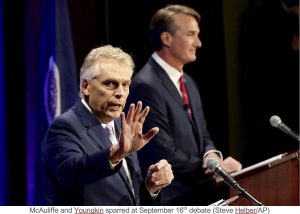 A former Chair of the Democratic National Committee, McAuliffe is an attorney and entrepreneur, who has amassed millions as a banker, investor, real estate developer and internet venture capitalist, and is known as a prodigious fundraiser.

"The Macker," 64, easily won the June 8th Democratic primary, garnering 62% of the vote and defeating four other candidates to win virtually every county in the state.

Glenn Youngkin, 54, the Republican nominee, is a former private equity executive who was chosen at the May 8th GOP state convention.

Prior to announcing his gubernatorial bid in January, he spent 25 years at the private equity firm The Carlyle Group, rising to become its co-CEO in 2018. Youngkin oversaw Carlyle's real estate, energy, infrastructure businesses, and investment solutions businesses, and helped oversee the firm's transition from a publicly traded partnership into a corporation before retiring in July of 2020.

Youngkin, who self-funded his primary bid to the tune of $5.5 million, is worth an estimated net worth of over $300 million - reportedly ten times that of McAuliffe's.

In the contentious first debate of the race, held on September 16th, McAuliffe and Youngkin sparred over COVID-19 vaccine mandates, abortion rights, tax policy, police reform, clean energy, education and more, reflecting the issues of greatest concern to the voters.

In a September 13-17, 2021 Washington Post-Schar School poll of registered Virginia voters, 25% said the economy is the most important issue in casting their ballot, while 17% picked the coronavirus, 14% chose education, 11% crime and public safety, 9% percent abortion and 7% taxes. 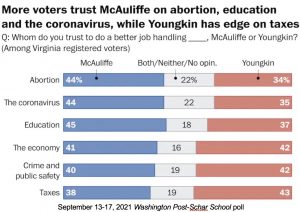 As of last Friday, the seven-day average of covid-19 cases in Virginia was at 3,238, compared with the 1,379 average reported at the beginning of August, despite the fact that 59.8% of the population was fully vaccinated, the highest rate in the south.

McAuliffe has also attacked Youngkin, whom he has branded "Trumpkin" for his ties to former President Donald Trump, who has endorsed the GOP nominee.

Youngkin, who in early campaign pitches said, “President Trump represents so much of why I’m running,” has since downplayed the connection saying that the race is "not about President Trump. There are two people on the ballot and that's me and Terry McAuliffe."

Youngkin, who has lent his campaign close to $17 million, is leading the money race. Contribute what you can to Terry HERE 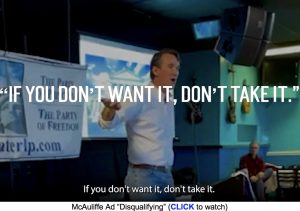 Early Vote has started! For the first time in a gubernatorial election, Virginia voters have the option to participate in in-person early voting or no-excuse mail voting.