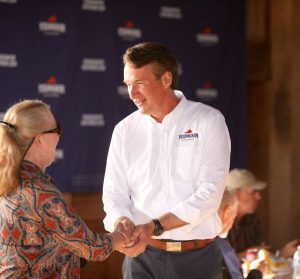 Youngkin: "Democrats drove (VA) into the ditch and they have been piling dirt on her every chance they get" (Ben Craft/News Virginian)

Virginia Republicans have chosen their nominee in this year's gubernatorial contest, one of two taking place in 2021.

In the May 8th "unassembled" convention, 30,000 of 53,000 registered delegates turned out to cast ballots in one of 39 remote drive-thru locations. 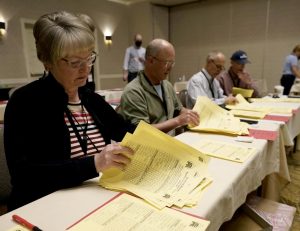 Due to the controversy spurred by former President Trump's baseless claims of an election "rigged" by voting machines, only paper ballots were used, which were hand-counted by a group of 60 closely-monitored GOP representatives.

Youngkin, who retired as co-CEO of the Carlyle Group in 2020 and is worth an estimated $254 million, has reportedly said he will spend up to $75 million of his personal fortune to become Virginia's Governor.

Youngkin did not previously align himself with former President Donald Trump, who lost the Commonwealth by over 10% in the 2020 presidential election. Trump, however, was quick to endorse Youngkin Tuesday saying, "Glenn is a pro-Business, pro-Second Amendment, pro-Veterans, pro-America...he has my Complete and Total Endorsement!" 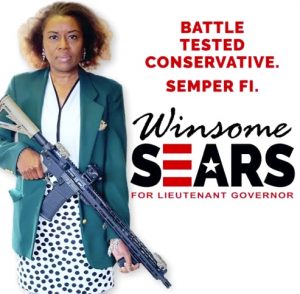 If successful in the general election, Sears, a former Marine who was born in Jamaica, would become the first Black woman to win statewide office in Virginia.

An "unapologetic" conservative who was the first Black Republican woman elected to the Virginia General Assembly in 2001, Sears left after one term to launch an unsuccessful congressional bid against Democratic Congressman Bobby Scott.

Now the owner of an appliance and plumbing repair store in Winchester, she also waged an unsuccessful write-in campaign for the 2018 US Senate nomination. In 2020, she served as the national chair of Black Americans to Re-elect President Trump.

Attorney General
Virginia Delegate Jason Miyares' victory was the first to be announced after he secured the nomination for Attorney General in the third round with 6,490 votes to former Navy Judge Advocate General Chuck Smith with 6,064 votes.

Jack White was eliminated in the second round after garnering 2,282 votes, while Leslie Haley did not make it past the first round after earning only 1,767 votes.

A former state prosecutor and son of a Cuban immigrant, Miyares has represented Virginia Beach in the State House since 2016. He campaigned on gun rights, a tough-on-crime platform and against the "far left radical agenda" being pushed by Virginia Democrats.

Blue Virginia
Now considered a "blue" state, Virginia has voted Democratic in every presidential race since 2008 and in every statewide election since 2009.

Shifting demographics and rapid population growth over the last decade had put the Old Dominion in the battleground category, but the true transition came when Democrats flipped both state legislative chambers in 2019, giving them their first trifecta since 1994. 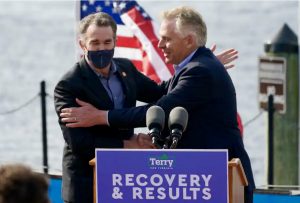 A former Chair of the Democratic National Committee, McAuliffe has enjoyed a successful career as an attorney, banker, investor, real estate developer and internet venture capitalist. 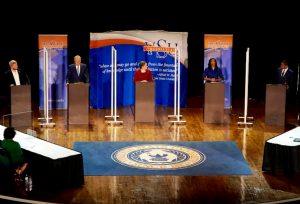 Should McAuliffe, whose net worth is reported in excess of $30 million, prevail, November's general election is likely to be the most expensive gubernatorial contest in Virginia's history.

Youngkin had raised $7.65 million, including a $5.5 million loan that came out of his own pocket. 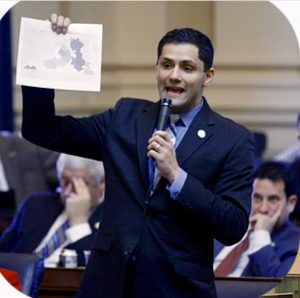 According to the April Christopher Newport University poll, almost two out of three Democratic voters (64%) say they are undecided. While Delegate Sam Rasoul led as the frontrunner with 12% support, but none of the remaining candidates received more than 2% support.

Delegate Elizabeth Guzman led the rest with the support of 4% of Democratic voters, but she withdrew from the race April 17th while the survey was in the field.

December 10, 2021  To remind us to laugh. On the 50-foot tree in front of Fox News’s New York City headquarter, which was set on fire this week “The fire is believed to have started after Fox...