There are more than three dozen heavily contested races that will decide control of the US House of Representatives in one of the most high-stakes midterm elections in modern history.

Despite defending more than twice as many vulnerable seats, Democrats are hoping the changing tides, including the Roe wave, will tip the balance in their favor in many of the "toss up" contests.

Among those are a dozen vulnerable Republican seats. 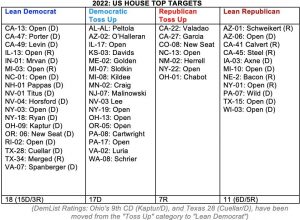 Valadao, one of 10 House Republicans who voted to impeach former President Donald Trump (R) for incitement of insurrection following the January 6, 2021 Capitol attack, opted to run in the new 22nd CD which encompasses 55% of his 21st CD. The current 22nd is represented by Republican Connie Conway, elected in the June 7, 2022 special election to replace Devin Nunes (R), but who chose not to run for a new full term. 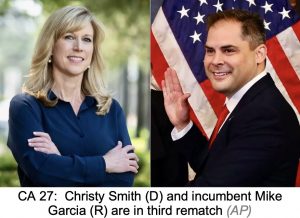 California 27
Among the most vulnerable GOP incumbents is Congressman Mike Garcia, who was first elected to represent the 25th Congressional District in May 2020, when he won a special election to succeed Congresswoman Katie Hill (D).

In a rematch of the special election, Garcia defeated former State Assemblywoman Christy Smith by 333 votes in 2020, making it the third-closest US House race that year. Biden won the north of Los Angeles district by 13 points.

Redistricting put Garcia into the new, slightly bluer (D+4) 27th, where he is being challenged again by Smith, who came in second with 35.4% to Garcia's 49.6% among six candidates in the open June 7, 2022 primary. 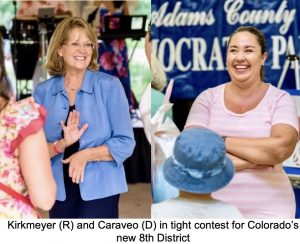 As of September 1, 2022, 27% percent of the district's active registered voters were Democrats, 24% were Republicans, and 46% were unaffiliated. Demographically, the 8th CD has the state's largest percentage of Hispanic or Latino residents, who make up 39% of the district's population.

Redistricting put 13th District Congressman Rodney Davis (R) into the new 15th CD, where he subsequently lost the GOP primary. The new, D+3 Democratic-friendly 13th snakes across central Illinois and includes all or most of the communities of East St. Louis, Springfield, Decatur and Champaign-Urbana. 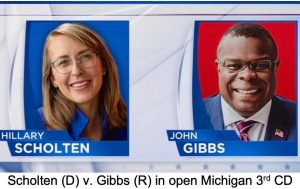 Michigan 03
Congressman Peter Meijer, one of 10 Republicans who voted to impeach Trump, lost his seat in the August 2nd GOP primary to conservative commentator and Trump-backed challenger John Gibbs, 48.2% to 51.8%.

Gibbs is facing former Department of Justice attorney Hillary Scholten, who challenged Meijer in 2020, losing to him six points in a district Trump won by 3 points.

Redistricting, however, made the Grand Rapids-based district more friendly to Democrats, from a R+4 to D+1. 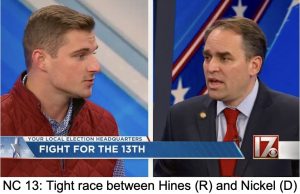 The 13th CD, vacated by Congressman Ted Budd, who is running for US Senate, is a contest between Democrat State Senator Wiley Nickel and Trump-endorsed former college football player Bo Hines.

The new district, implemented by the state Supreme Court after rejecting the GOP-drawn map, shifted the old 13th, which stretched from the northern suburbs of Charlotte to Greensboro, to the southern exurbs of Raleigh. It remains a R+2 Republican-leaning seat.

Ohio 01
First elected in 1994, GOP Congressman Steve Chabot has represented southwest Ohio for more than a quarter of a century but is now a prime target for flipping after redistricting shifted his seat from an R+4 to D+2 Democratic-leaning seat.

The Democratic candidate in the race is former public school teacher and Cincinnati City Councilman Greg Landsman. A September 17-21, 2022 Impact Research poll put Landsman three points ahead of Chabot at 49% to 46%. 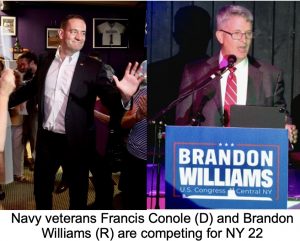 New York 22
The open 22nd CD draws from retiring GOP Congressman John Katko's Syracuse-based seat, and that of Congresswoman Claudia Tenney's, who is now running in the 24th district.