There are more than two dozen heavily contested "toss ups" that will decide control of the US House of Representatives in one of the most high-stakes midterm elections in modern history.

Despite defending more than twice as many vulnerable seats, Democrats are hoping the changing tides, including the Roe wave, will tip the balance in their favor in many of the "toss up" contests. 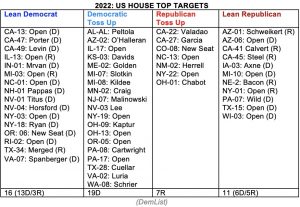 To keep you informed, to follow is the first in a series of Dailys highlighting the top-tier targets by both parties.

Alaska At-Large
Newly elected Mary Peltola, who won the August 16 special election to fill the seat held for 49 years by the late Don Young (R), is running for a full term to the next Congress.

In the open, ranked-choice general election in November, Peltola is facing Trump-endorsed former Governor Sarah Palin (R), whom she defeated 51.5% to 48.5% in the special election. Republican Nick Begich III (R), who came in third in both the special and the regularly scheduled congressional primary, is also in the race.

Peltola is the first indigenous member of Congress from Alaska, which delivered a 10-point victory for Trump over Joe Biden in 2020. 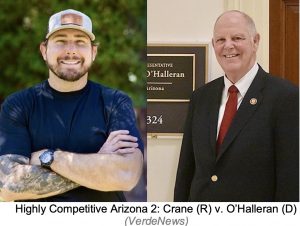 Arizona 02
Two-term Congressman Tom O'Halleran, who was reelected to Arizona's First Congressional District with 51.6% of the vote in 2020, is now running in the newly redistricted 2nd CD in one of the midterm's most competitive seats.

The new CD2 includes most of O'Halleran's old CD, but shifts the Flagstaff -based seat to a R+6 GOP lean.

O'Halleran is being challenged by former Navy SEAL and small business owner Eli Crane, who has Trump's endorsement. An August 11-15, 2022 Moore Information survey showed O'Halleran and Crane in a statistical dead heat at 46% and 45% respectively. 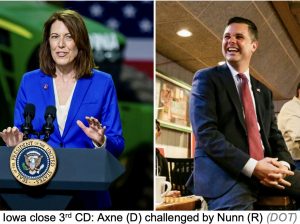 The newly redistricted Des Moines-based 3rd CD, is slightly more Republican, with a PVI of R+3.

Axne is being challenged by State Senator Zach Nunn, who has been endorsed by Trump, and, in the last public poll, conducted July 29-August 5 by RMG Research, was leading Axne 49%-41% (MOE: ± 4.9%)

Although King has a significant fundraising advantage, the new 17th Congressional District is more Democratic-leaning after redistricting, going from an R+3. to D+2.

Kansas 03
Two-term Incumbent Sharice Davids is in a rematch against businesswoman and former Kansas GOP Chairwomen Amanda Adkins, whom she defeated in 2020, 53.6% to 43.6%. Davids was first elected in 2018, unseating four-term GOP Congressman Kevin Yoder 53.6% to 43.9%. 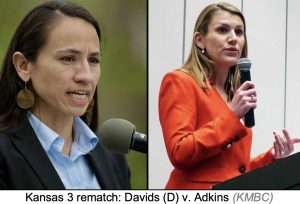 After redistricting, the Kansas City metro area district, which went for Biden by almost 11 points in 2020, went from a D+2 to an R+1 GOP-leaning seat.

An RMG Research survey, conducted just prior to the August 2 primaries, showed Davids and Adkins statistically tied at 45% to 46% (+/-4.9%).

Maine 02
Congressman Jared Golden will defend his seat against former Republican Congressman Bruce Poliquin, whom Golden unseated by 3,000 votes in 2018 to win the Second Congressional District.

The Lewiston-based 2nd Congressional District, which remained an R+6 lean after redistricting, delivered a 52.3% victory to Trump in 2020.'

Michigan 07
Congresswoman Elissa Slotkin, who flipped the 8th Congressional District in 2018 by unseating incumbent Republican Mike Bishop, and who won reelection in 2020 with 50.9% of the vote, is facing a tough reelection fight. 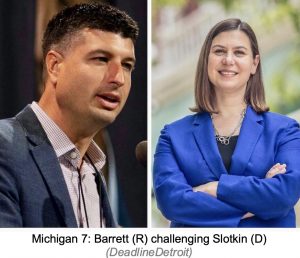 Kildee's once-safe district, which includes Flint and Saginaw, became more Republican with the addition of Midland, and at now a R+1 lean, is among Democrats' most vulnerable seats.

While Biden won the district 52.4% to 45.5% over Trump in 2020, Craig won re-election by just two points over small business owner and Marine veteran Tyler Kistner. 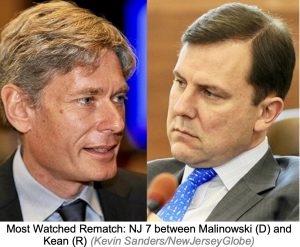 In another high-profile rematch, Craig is being challenged again by Kistner in the suburban Twin Cities seat which changed little after redistricting.

Related: DemDaily: US House: The Political Landscape and Race Ratings 9/20/22