Now just 100 days out from the November 8, 2022 elections, the contest for control of the US House of Representatives is in clearer focus.

The partisan breakdown of the current 117th Congress of the US House of Representatives stands at 221 Democrats to 214 Republicans, including one Democratic and three Republican vacancies. There are an additional six non-voting members from DC and the Territories.

Republicans will need a net gain of four seats to take control of the House.

The Political Landscape
The GOP enters the election with the traditional advantage of losses suffered by the party in the White House in off-election years. Since World War II, the sitting president's party has lost an average of 26 seats in the House.

Midterm elections are often regarded as a referendum on the president's performance. Despite President Biden's historic gains in his first 18 months of office, including successfully guiding the country to recovery amid an inherited pandemic, his approval rating stands at just 39%.

While concerns over the economy and inflation appear to be driving Biden's poor numbers, Democrats continue to outpoll the President's approval rating on both the generic ballot and in polls of individual races. 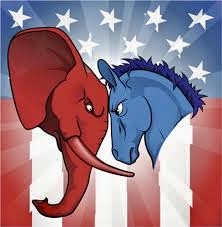 In another positive sign, after the economy (20%), respondents cited abortion (16%) as the second most important issue affecting their vote this November.

While hot-button issues don't always translate to results at the ballot box, the recent decision by the US Supreme Court's conservative supermajority to overturn the constitutionally protected right to abortion has incensed and energized voters of both parties. A 61% majority of US adults say abortion should be legal in all or most cases.

After inflation and cost of living (11%), signature Democratic issues such as gun control, the environment, and voting rights, came in at under 4% in the Suffolk poll.

Then there is, of course, the Trump factor. While the former President's endorsements have helped propel some candidates to primary victories, he has also had notable defeats. Most of his anointed candidates have been in statewide races that will have a greater impact on the 2020 presidential election, but he has played a role in a handful of House primaries with mixed results.

However, Trump's increasingly negative visibility and low ratings, heightened by the January 6th Committee hearings, present an ongoing threat to the GOP. If the trajectory continues, it could turn the tide in favor of Democrats in a number of individual races.

On the national committee front, the GOP is winning the fundraising contest, with its leading Super PAC, the Congressional Leadership Fund, ending June with $130 million on hand to the Democratic House Majority PAC's $60 million. Republicans' online fundraising, however, has slowed considerably in recent months, while Democrats' online contributions have surged. 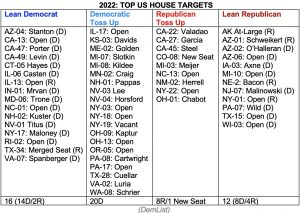 Races and Ratings
Despite the GOP advantage in the state-by-state control of the reapportionment, Democrats faired better than expected in the redistricting process. The number of Democratic-leaning House seats actually increased slightly, while the number of competitive seats decreased.

Democrats, however, are still defending more than twice as many vulnerable seats under the new maps, with 35 members not seeking reelection due to retirement, running for another office or incumbent primary losses, compared to Republicans' 24 members.

As it stands now, the size of the anticipated "red wave" will not be the tsunami once predicted, but even if Democrats win all the toss-up races and hold onto those they are favored to win, the projected losses fall short of the numbers needed to maintain their majority.

January 18, 2023 As we begin the new year, we honor the elected lawmakers and public servants we lost in 2022. “We must find time to stop and thank the people who make a difference in our...

May 7, 2021 To Remind Us to Laugh On Republicans acting to remove Liz Cheney from House Republican leadership “Liz Cheney said Republicans have to choose between the truth and Trump, to...