At 8 days out from the 2022 midterm elections, the battleground lines are clear in the high stakes fight for control of the US House of Representatives. 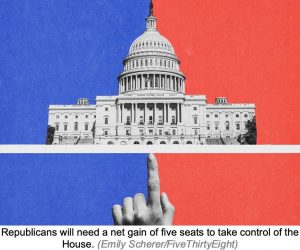 The Political Landscape
Democrats entered the election cycle facing the traditional pattern of losses suffered by the party in the White House in off-election years. Since World War II, the sitting president's party has lost an average of 26 seats in the House.

While Republicans are still favored to flip the chamber, the Supreme Court’s June 24 decision to overturn Roe v. Wade and the constitutional right to an abortion shifted the political winds for Democrats -- turning what could have been a tsunami of defeats into what is now more likely a smaller red wave. 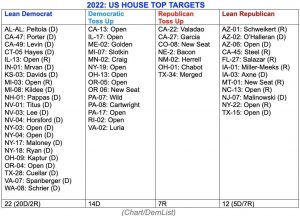 Six in ten voters disapprove of the decision, particularly women and young voters who have turned out in droves to register to vote and vote early.

Donald Trump, whose endorsement boosted many right-wing candidates to primary victory, is a liability to Republicans in the general election. Registered voters have a 57% unfavorable/41% favorable view of the former President.

The GOP stands to lose a number of high-profile races up and down the ticket due to their nomination of anti-abortion extremists, particularly when pitted against moderate Democrats. 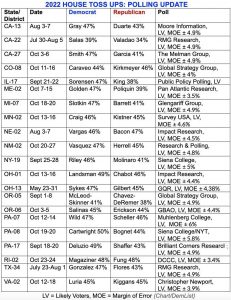 Also on the ballot is President Biden's performance, which stands at just 43% approval. Despite historic legislative and political gains, the economy and inflation remain the top concerns among voters, which has stagnated the traction he received just two months ago.

While the President's numbers are still underwater, in swing states his approval rating is higher than Republicans in Congress.

Republicans, however, hold the edge in enthusiasm. An October 14-18, 2022 NBC News poll finds Republicans entering the homestretch with a 78%-69% advantage in voting enthusiasm, half their 66%-48% edge pre-Dobbs but wider than their 69%-66% lead in September.

The balance of power in the US House is likely to come down to fewer than ten races, which will depend on voter turnout.

Early vote is underway in almost every state and territory.
Cast your ballot now! Voter information