With all 50 state redistricting maps now complete, the political landscape going into the 2022 midterms is finally in focus.

Despite the GOP advantage in control of the reapportionment process in more states, the number of Democratic-leaning US House seats actually increased slightly, while the number of competitive seats decreased.

According to FiveThirtyEight's analysis, the new maps have six more Democratic-leaning seats than the old ones and the same number of Republican-leaning seats. This is attributed to aggressive map-drawing by Democrats in states such as Illinois as well as court decisions overturning Republican gerrymanders in states like North Carolina. 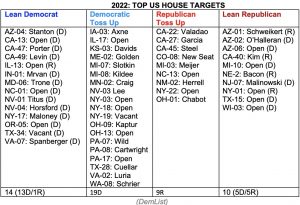 Republicans, nevertheless, have still benefited from their own creative gerrymandering in states like Florida and in court decisions striking down Democratic gerrymanders like those in Maryland and New York.

The GOP also effectively shored up many of their incumbents and successfully converted light-red districts into safer seats in states like Texas.

Advantage GOP
After accounting for incumbency, FiveThirtyEight actually gives a slight edge to Republicans, predicting a net gain of three to five GOP seats in 2022 based on the new lines alone. A number of other factors play in Republicans' favor.

The number of members not seeking reelection due to retirement or running for another office stands at 31 Democrats to 18 Republicans, and Democrats are defending more than twice as many vulnerable seats under the new maps.

The new maps have also pitted incumbents of the same party against each other in six seats, with Democrats battling it out in four races and Republicans in two.

Then there are the traditional losses suffered by the party in the White House in off-election years. Since World War II, the president's party has lost an average of 26 seats in the House.

Midterm elections are often regarded as a referendum on the sitting president or party's performance.

President Biden's approval rating is 42%, and his handling of inflation, the number one issue in the minds of voters today, stands at 28%. Biden's highest ratings, according to a new ABC/Ipsos poll released Sunday, are on his handling of COVID-19 response, at 56%.

The question is whether Democrats can alter that pessimistic scenario, if not at the national level, then in individual congressional districts, by capitalizing on their advantage with other issues of importance to Americans. Those include the pending Supreme Court ruling on Roe v. Wade, gun control, and of course, the January 6 hearings, which kick off publicly this week.

Republicans need a net gain of 5 seats to take control of the House. 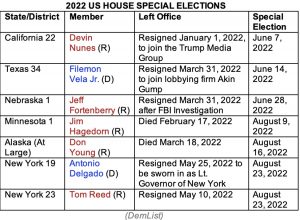 Special Elections
There are seven special elections on the calendar to fill the remaining terms of members of the 117th Congress who vacated their seats early.

None, with the possible exception of Alaska, which is holding the nation's first top-four primary, is expected to change the composition of the current Congress.

The special elections winners will then have to run for reelection for a full term in the newly drawn congressional districts on November 8.

The victor in California's 22nd District special election, however, will only serve through the end of this term, as the current district was essentially eliminated under the new map and none of the special election contenders is running in adjacent seats.

January 20, 2020 The eighth day of the impeachment trial of President Donald J. Trump launched the Question and Answer phase from Senators, using the opportunity to expand upon and highlight key...